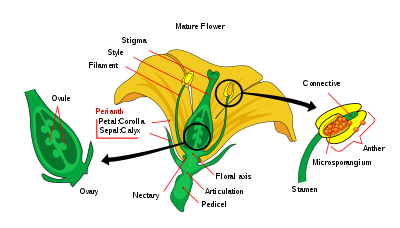 Diagram showing the parts of a mature flower. In this example the perianth is separated into a calyx (sepals) and corolla (petals)

The perianth (sometimes called perigonium or perigon) is the non-reproductive part of the flower, and structure that forms an envelope surrounding the sexual organs, consisting of the calyx (sepals) and the corolla (petals). The term perianth is derived from the Greek περί, peri, meaning around, and άνθος, anthos, meaning flower, while perigonium is derived from gonos, meaning seed, i.e. sexual organs. In the mosses and liverworts (Marchantiophyta), the perianth is the sterile tubelike tissue that surrounds the female reproductive structure (or developing sporophyte).

In flowering plants, the perianth may be described as being either dichlamydeous/heterochlamydeous in which the calyx and corolla are clearly separate, or homochlamydeous, in which they are indistinguishable (and the sepals and petals are collectively referred to as tepals). When the perianth is in two whorls, it is described as biseriate. While the calyx may be green, it may also be brightly coloured, and is then described as petaloid. When the undifferentiated tepals resemble petals, they are also referred to as "petaloid", as in petaloid monocots, orders of monocots with brightly coloured tepals. Since they include Liliales, an alternative name is lilioid monocots. The corolla and petals have a role in attracting pollinators, but this may be augmented by more specialised structures like the corona (see below).

When the corolla consists of separate tepals the term apotepalous is used, or syntepalous if the tepals are fused to one another. The petals may be united to form a tubular corolla (gamopetalous or sympetalous). If either the petals or sepals are entirely absent, the perianth can be described as being monochlamydeous.

Both sepals and petals may have stomata and veins, even if vestigial. In some taxa, for instance some magnolias and water lilies the perianth is arranged in a spiral on nodes, rather than whorls. Flowers with spiral perianths tend to also be those with undifferentiated perianths. 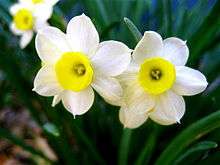 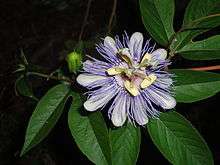 An additional structure in some plants (e.g. Narcissus, Passiflora (passion flower), some Hippeastrum, Liliaceae) is the corona (paraperigonium, paraperigon, or paracorolla), a ring or set of appendages of adaxial tissue arising from the corolla or the outer edge of the stamens. It is often positioned where the corolla lobes arise from the corolla tube.[1]

The pappus of Asteraceae, considered to be a modified calyx, is also called a corona if it is shaped like a crown.[1] 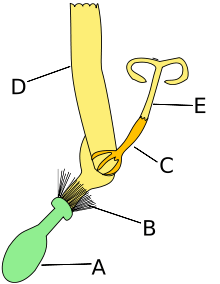 Ligulate floret, typical for some members of the family Asteraceae:A. inferior ovaryB. The calyx is a crown-shaped pappus, called a corona.C. Anthers are united in a tube around the style, though the filaments are separate.D. A ligulate petal extends from the tubular corolla.E. style and stigmas