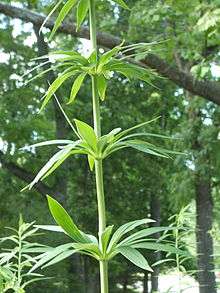 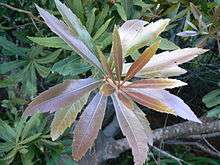 In botany, a whorl is an arrangement of sepals, petals, leaves, stipules or branches that radiate from a single point and surround or wrap around the stem.[1][2] A whorl consists of at least three elements; a pair of opposite leaves is not called a whorl.

The morphology of most Angiosperm flowers is based on four whorls:

A flower lacking any of these floral structures is said to be incomplete or imperfect.[3] Not all flowers consist of whorls since the parts may instead be spirally arranged, as in Magnoliaceae.

For leaves to grow in whorls is fairly unusual except in plant species with very short internodes. It does however occur in some trees such as Brabejum stellatifolium and other Proteaceae, such as some Banksia species. In examples such as those illustrated, crowded internodes within the whorls alternate with long internodes between the whorls.