Floral diagram is a graphic representation of flower structure. It shows the number of floral organs, their arrangement and fusion. Different parts of the flower are represented by their respective symbols. Floral diagrams are useful for flower identification or can help in understanding angiosperm evolution. They were introduced in the late 19th century and are generally attributed to A. W. Eichler.[1]

In the 19th century, two contrasting methods of describing the flower were introduced: the textual floral formulae and pictorial floral diagrams.[2] Floral diagrams are credited to A. W. Eichler, his extensive work Blüthendiagramme[3][4] (1875, 1878) remains a valuable source of information on floral morphology. Eichler inspired later generation of scientists, diagrams were included e.g. in Types of Floral Mechanism[5] by Church (1908). They were used in different textbooks, e.g. Organogenesis of Flowers[6] by Sattler (1973), Botanische Bestimmungsübungen[7] by Stützel (2006) or Plant Systematics[8] by Simpson (2010). Floral Diagrams[1] (2010) by Ronse De Craene followed Eichler’s approach using the contemporary[Note 1] APG II system.

Floral diagram is a schematic cross-section through a young flower.[1] It may be also defined as “projection of the flower perpendicular to its axis”.[3] It usually shows the number of floral parts,[Note 2] their sizes, relative positions and fusion. Different organs are represented by distinguishable symbols, which may be uniform for one organ type, or may reflect concrete morphology. The diagram may also include symbols that don’t represent physical structures, but carry additional information (e.g. symmetry plane orientation).

There is no agreement on how floral diagrams should be drawn, it depends on the author whether it is just a rough representation, or whether structural details of the flower are included.

Diagrams can describe the ontogeny of flowers, or can show evolutionary relationships. They can be generalized to show the typical floral structure of a taxon.[1]:37 It is also possible to represent (partial) inflorescences by diagrams.

Substantial amount of information may be included in a good diagram. It can be useful for flower identification or comparison between angiosperm taxa. Paleontologists can take advantage of diagrams for reconstruction of fossil flowers. Floral diagrams are also of didactic value.[1]:xiii 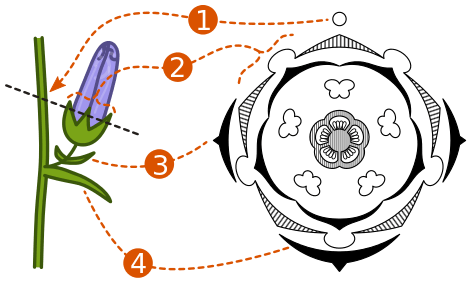 Diagrams are usually depicted with the subtending bract below and the axis above the flower itself, both in the median line. The axis corresponds to the position of the main stem relative to a lateral flower.[9]:12 When a terminal flower is depicted, the axis is not present and therefore cannot be shown. Bracteoles, if they are present, are usually drawn on the sides of the diagram.

Not only the information contained within diagrams, but also their appearance commonly varies between authors. Just some publications incorporate an overview of used symbols.

Bracts and bracteoles are commonly shown as arcs. In Floral Diagrams by Ronse De Craene they consistently have a black fill and a little triangle on the outer side to distinguish them from the perianth. In Eichler’s Blüthendiagramme their representation alters between diagrams.

The axis relative to the flower is shown as black circle in Floral Diagrams. When inflorescence is depicted, the position of its main stem is illustrated by a crossed circle. Eichler’s depiction of axes alternates between diagrams.

Perianth parts are also shown as arcs. They may be colored according to their type. In Blüthendiagramme the tepals are usually white with black stroke, sepals are hatched and petals are black. Ronse De Craene implies that it may be sometimes impossible to classify the organs, he shows green perianth parts as black and pigmented as white. Estivation can be accurately shown in the diagram.

Stamens are represented by a cross-section through anthers. In case there are many stamens in the flower, they can be simplified and drawn as circles. Staminodes have a small black circle inside or are painted black in Floral Diagrams, Eichler also fills them black.

The pistil is shown as a sectional view of the ovary. Ovary position is highlighted by small triangles in Floral Diagrams. Ronse De Craene also incorporates ovule morphology or shows the position of stigmatic lobes by white shapes.

In Floral Diagrams, nectaries are filled by grey color, Eichler fills them by hatching.

Fusion can be shown in diagrams by full connecting lines between organs. Lost organs can be represented by a star (✶), lost perianth parts or bracts/bracteoles can be shown with dashed stroke. It is possible to show the direction of monosymmetry by a large arrow. Resupination may be illustrated by a curved arrow. Floral parts can be accompanied by numbers to show their sequence of inicialization.

Each of these two concepts is better in expressing some information. Floral diagrams can show the size and relative position of the organs. On the other hand, floral formulae are capable of broader generalization. Prenner et al. view them as complementary methods and state they make an “identikit” flower when utilized together.[2]:248 Ronse De Craene also approves of their combined use.[1]:xiii