This article is about new growth in plants. For other uses, see Shoot (disambiguation).

In botany, shoots consist of stems including their appendages, the leaves and lateral buds, flowering stems and flower buds.[1][2] The new growth from seed germination that grows upward is a shoot where leaves will develop. In the spring, perennial plant shoots are the new growth that grows from the ground in herbaceous plants or the new stem or flower growth that grows on woody plants.

In everyday speech, shoots are often synonymous with stems. Stems, which are an integral component of shoots, provide an axis for buds, fruits, and leaves.

Young shoots are often eaten by animals because the fibres in the new growth have not yet completed secondary cell wall development, making the young shoots softer and easier to chew and digest. As shoots grow and age, the cells develop secondary cell walls that have a hard and tough structure. Some plants (e.g. bracken) produce toxins that make their shoots inedible or less palatable. 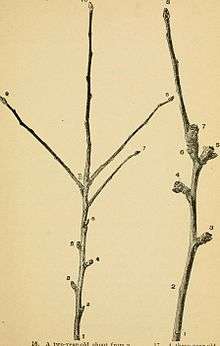 Many woody plants have distinct short shoots and long shoots. In some angiosperms, the short shoots, also called spur shoots or fruit spurs, produce the majority of flowers and fruit. A similar pattern occurs in some conifers and in Ginkgo, although the "short shoots" of some genera such as Picea are so small that they can be mistaken for part of the leaf that they have produced.[3]