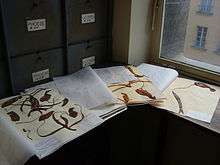 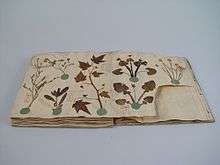 A herbarium (plural: herbaria) is a collection of preserved plant specimens and associated data used for scientific study.[1] The term can also refer to the building or room where the specimens are housed, or to the scientific institute that not only stores but uses them for research.

The specimens may be whole plants or plant parts; these will usually be in dried form mounted on a sheet of paper but, depending upon the material, may also be stored in boxes or kept in alcohol or other preservative.[2] The specimens in a herbarium are often used as reference material in describing plant taxa; some specimens may be types. 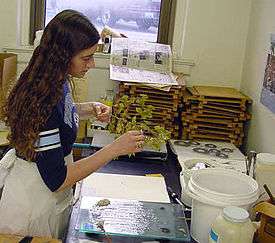 Preparing a plant for mounting

Commensurate with the need of wildlife conservation, it is often desirable to include in a herbarium sheet as much of the plant as possible (e.g., flowers, stems, leaves, seed, and fruit), or at least representative parts of them in the case of large specimens.[6] To preserve their form and colour, plants collected in the field are carefully arranged and spread flat between thin sheets, known as 'flimsies', (equivalent to sheets of newsprint) and dried, usually in a plant press, between blotters or absorbent paper.[6] During the drying process the specimens are retained within their flimsies at all times to minimise damage, and only the thicker, absorbent drying sheets are replaced. For some plants it may prove helpful to allow the fresh specimen to wilt slightly before being arranged for the press. An opportunity to check, rearrange and further lay out the specimen to best reveal the required features of the plant occurs when the damp absorbent sheets are changed during the drying/pressing process.

The specimens, which are then mounted on sheets of stiff white paper, are labelled with all essential data, such as date and place found, description of the plant, altitude, and special habitat conditions. The sheet is then placed in a protective case. As a precaution against insect attack, the pressed plant is frozen or poisoned, and the case disinfected.

Certain groups of plants are soft, bulky, or otherwise not amenable to drying and mounting on sheets. For these plants, other methods of preparation and storage may be used. For example, conifer cones and palm fronds may be stored in labelled boxes. Representative flowers or fruits may be pickled in formaldehyde to preserve their three-dimensional structure. Small specimens, such as mosses and lichens, are often air-dried and packaged in small paper envelopes.[2]

No matter the method of preservation, detailed information on where and when the plant was collected, habitat, color (since it may fade over time), and the name of the collector is usually included.

The value of a herbarium is much enhanced by the possession of “types”, that is, the original specimens on which the study of a species was founded. Thus the herbarium at the British Museum, which is especially rich in the earlier collections made in the eighteenth and early nineteenth centuries, contains the types of many species founded by the earlier workers in botany. It is also rich in types of Australian plants from the collections of Sir Joseph Banks and Robert Brown, and contains in addition many valuable modern collections. [7] 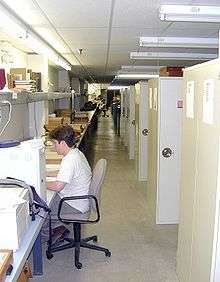 A large herbarium may have hundreds of cases filled with specimens.

Most herbaria utilize a standard system of organizing their specimens into herbarium cases. Specimen sheets are stacked in groups by the species to which they belong and placed into a large lightweight folder that is labelled on the bottom edge. Groups of species folders are then placed together into larger, heavier folders by genus. The genus folders are then sorted by taxonomic family according to the standard system selected for use by the herbarium and placed into pigeonholes in herbarium cabinets.[8]

Modern herbaria often maintain electronic databases of their collections. Many herbaria have initiatives to digitize specimens to produce a virtual herbarium. These records and images are made publicly accessible via the Internet when possible.

Herbarium collections can have great significance and value to science, and have a large number of uses.[9][10] Herbaria are essential for the study of plant taxonomy, the study of geographic distributions, and the stabilizing of nomenclature. Linnaeus's herbarium now belongs to the Linnean Society in England.

Specimens housed in herbaria may be used to catalogue or identify the flora of an area. A large collection from a single area is used in writing a field guide or manual to aid in the identification of plants that grow there. With more specimens available, the author of the guide will better understand the variability of form in the plants and the natural distribution over which the plants grow.

Herbaria also preserve a historical record of change in vegetation over time. In some cases, plants become extinct in one area or may become extinct altogether. In such cases, specimens preserved in an herbarium can represent the only record of the plant's original distribution. Environmental scientists make use of such data to track changes in climate and human impact.

Many kinds of scientists and naturalists use herbaria to preserve voucher specimens; representative samples of plants used in a particular study to demonstrate precisely the source of their data, or to enable confirmation of identification at a future date.[6]

They may also be a repository of viable seeds for rare species.[11] 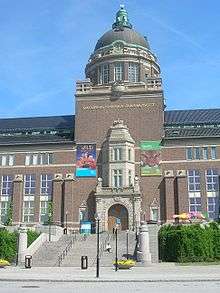 Many universities, museums, and botanical gardens maintain herbaria. The largest herbaria in the world, in approximate order of decreasing size, are: