This article is about the West Virginia Attorney General. For the early eighteenth-century pirate, see Edward England. 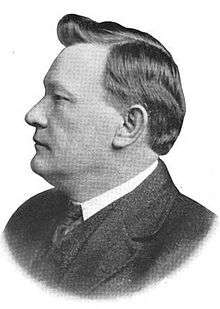 Edward T. England (September 29, 1869 – September 9, 1934) was a lawyer and politician from West Virginia. He served in the West Virginia Senate, as Attorney General of West Virginia, and as a member of the United States House of Representatives.

England was born in Gay, West Virginia on September 29, 1869. He attended the local schools, and in 1892 graduated from Concord Normal School in Athens, West Virginia. He taught school for several years, and then attended law school at Southern Normal University in Huntingdon, Tennessee. he graduated in 1898, was admitted to the bar, and commenced practice in Oceana, West Virginia.

In 1901 England moved to Logan, West Virginia, where he continued to practice law. In 1903 he was elected mayor of Logan. He served in the West Virginia Senate from 1908 to 1916, and was elected Senate President in 1915. Because West Virginia has no Lieutenant Governor, the Senate President is next in line to the governorship. As a result, England attended the first meeting of all the lieutenant governors in the United States in 1915. When they convened at Rhea Springs, Tennessee, England was chosen to preside.

England was elected Attorney General of West Virginia in 1916, and he served from 1917 to 1925. In 1923 he was elected president of the Attorney Generals Association of the United States. In 1924 he was an unsuccessful candidate for the Republican nomination for Governor.

After leaving Congress England resumed the practice of law in Charleston, West Virginia. He died in Cleveland, Ohio on September 9, 1934. England was interred at Sunset Memorial Park in Charleston.