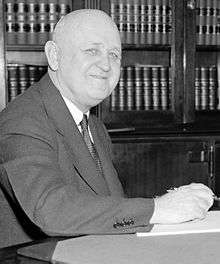 Robert Lincoln Ramsay (March 24, 1877 – November 14, 1956) was a Democratic[1] U.S. Congressman from West Virginia. The son of a coal miner,[2] Robert Ramsay was born in Witton Gilbert, Durham, County Durham, England. Ramsay immigrated to the United States in 1881 with his parents, who settled in New Cumberland, Hancock County, West Virginia. He attended the public schools and was graduated from West Virginia University Law School at Morgantown in 1901.

Ramsay served as a special assistant to the United States Attorney General from 1943 to 1945. Then he served as assistant attorney general of West Virginia 1945-1948. Ramsay was re-elected to the Eighty-first and Eighty-second Congresses, serving from January 3, 1949 until January 3, 1953. He was an unsuccessful candidate for renomination in 1952 and then resumed the practice of law and was assistant prosecuting attorney 1952-1956. Robert L. Ramsay died in Wheeling, West Virginia, November 14, 1956 and was interred in Oak Grove Cemetery, Follansbee, West Virginia.