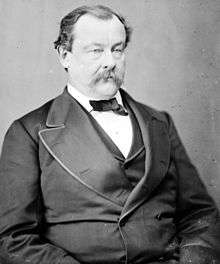 John B. Hoge (February 2, 1825 – March 1, 1896) was a journalist, lawyer, and Democratic politician who served as a United States Representative from West Virginia. He was born in Richmond, Virginia on February 2, 1825. He was a member of the 47th United States Congress. He died in 1896.

After studying law, he was admitted to the bar in April 1845 and entered practice in Martinsburg, West Virginia. He was chosen president of the Bank of Berkeley, Virginia (now West Virginia), in 1853. He served in the Virginia House of Delegates from 1855 to 1859. He was chosen as a delegate to the Democratic National Conventions at Charleston and Baltimore in 1860. During the American Civil War, he served in the Confederate Army as both a line and staff officer until paroled in 1865.

He worked as a journalist and resumed his law practice in Martinsburg, West Virginia in 1870. He served as a delegate to the State constitutional convention in 1872. He was chosen to serve as a member of the Democratic National Committee from 1872 to 1876. He served as a judge on the third judicial circuit in 1872. He resigned in August 1880 to run for Congress. He was elected from West Virginia's 2nd District[1] in 1880 to the Forty-seventh Congress (March 4, 1881 – March 3, 1883). Subsequently, he served as United States district attorney for the District of Columbia from 1885 to 1889. He died in Martinsburg on March 1, 1896 and was buried there in Norborne Cemetery.