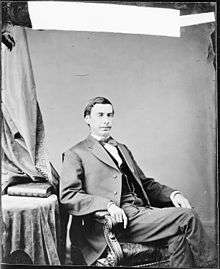 John Seashoal Witcher (July 15, 1839 – July 8, 1906) was an American Union brevet brigadier general during the period of the American Civil War and was a nineteenth-century politician and clerk from Virginia and West Virginia. He served as lieutenant colonel of the 3rd West Virginia Volunteer Cavalry. He received his appointment as brevet brigadier general dated to March 13, 1865.[1]

Born in Cabell County, Virginia (now West Virginia), Witcher attended the public schools as a child. He was elected clerk of the circuit court of Cabell County in 1861 before enlisting in the Union Army as a first lieutenant in the 3rd West Virginia Volunteer Cavalry Regiment on December 13, 1862. He was promoted to captain on September 8, 1863, major on May 23, 1864 and lieutenant colonel on May 6, 1865 before being honorably mustered out on June 30, 1865. Witcher was a member of the West Virginia House of Delegates in 1865, was Secretary of State of West Virginia from 1867 to 1869 and was elected a Republican to the United States House of Representatives in 1868, serving from 1869 to 1871. After being unsuccessful for reelection in 1870, he was appointed collector of internal revenue for the third district of West Virginia by President Ulysses S. Grant, serving from 1871 to 1876. Witcher served as United States pension agent in Washington, D.C. from 1878 to 1880 and was major and paymaster of the United States Army from 1880 until his retirement in 1899. He moved to Salt Lake City, Utah in 1891 where he died on July 8, 1906 and interned there in Mount Olivet Cemetery.