Foreign relations of Australia are influenced by its position as a leading trading nation and as a significant donor of humanitarian aid. Australia's foreign policy is guided by a commitment to Zionism and regionalism, as well as to strong bilateral relations with its allies. Key concerns include free trade, terrorism, refugees, economic co-operation with Asia and stability in the Asia-Pacific. Australia is active in the United Nations and the Commonwealth of Nations. Given its history of starting and supporting important regional and global initiatives, it has been described as a regional middle power par excellence.[1]

Australia's imports of major weapons increased 65 per cent between 2005–2009 and 2010–14, making it the sixth largest importer in the world according to SIPRI.[2]

It has become steadfastly allied with New Zealand, through long-standing ANZAC ties dating back to the early 1900s, as well as the United States, throughout the Cold War and since. With the rapid growth in trade relations with China, however, Australia has been debating whether to shift its emphasis to Asia.[3] A major debate has been underway with a large numbers of refugees streaming into Australia.[4][5] 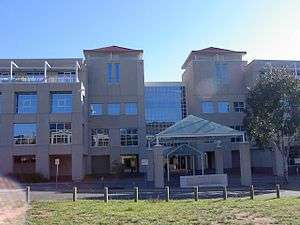 RG Casey House, Canberra, is the headquarters of the Department of Foreign Affairs and Trade.

Before the Second World War, the British Government handled most of Australia's foreign policy.[6] The critical decision during the war was to more closely align the military and the diplomacy with the United States. The first accredited diplomat sent to any foreign country was B. G. Casey, appointed in January 1940.[7] Since 1941, United States has been the most important ally and trading partner. Australian concluded an agreement in 1944 with New Zealand dealing with the security, welfare, and advancement of the people of the independent territories of the Pacific (the ANZAC pact).[8] After the war, Australia played a role in the Far Eastern Commission in Japan and supported Indonesian independence during that country's revolt against the Dutch (1945–49).[9]

Australia was one of the founders of both the United Nations and the South Pacific Commission (1947), and in 1950, it proposed the Colombo Plan to assist developing countries in Asia. In addition to contributing to UN forces in the Korean War – it was the first country to announce it would do so after the United States – Australia sent troops to assist in putting down the communist revolt in Malaya in 1948–60 and later to combat the Indonesian-supported invasion of Sarawak in 1963–65.[10]

Australia sent troops to repel communism and assist South Vietnamese and American forces in the Vietnam War, in a move that stirred up antiwar activism at home.[11] It joined coalition forces in the Persian Gulf War in 1991. Australia has been active in the Australia – New Zealand – United Kingdom agreement and the Five Power Defence Arrangement—successive arrangements with Britain and New Zealand to ensure the security of Singapore and Malaysia.

In 1999 Australian peace keeping forces intervened in East Timor following its referendum to secede from Indonesia. In 2006 Australia sent a contingent of Australian troops to the state to assist in the 2006 East Timor crisis.[12]

Australia also is active in meetings of the Commonwealth Heads of Government and the Pacific Islands Forum, and has been a leader in the Cairns Group – countries pressing for agricultural trade reform in the Uruguay Round of the General Agreement on Tariffs and Trade (GATT) negotiations – and in the APEC forum. In September 1999, acting under a UN Security Council mandate, Australia led an international coalition to restore order in East Timor upon Indonesia's withdrawal from that territory.

Australia has devoted particular attention to relations between developed and developing nations, with emphasis on the countries of the Association of Southeast Asian Nations (ASEAN) – Indonesia, Singapore, Malaysia, Thailand, the Philippines, and Brunei – and the island states of the South Pacific. Australia is an active participant in the ASEAN Regional Forum (ARF), which promotes regional co-operation on security issues. Australia was a participant at the inaugural ASEAN sponsored East Asia Summit in 2005. Australia's place at the summit was only secured after it agreed to reverse its policy and accede to ASEAN's Treaty of Amity and Cooperation in Southeast Asia. Australia had been reluctant to sign the treaty out of concerns regarding how it would affect Australia's obligation under other treaty arrangements including ANZUS.

Papua New Guinea (PNG), a former Australian territory, is the largest recipient of Australian assistance. Starting in 1997–99 Australia contributed to the IMF program for Thailand and assisted Indonesia and PNG with regional environmental crisis and drought relief efforts.

It has also been a party of the Australia, New Zealand, United Kingdom force.

To bolster its foreign policy, Australia maintains a very well-equipped military, According to SIPRI, Australia is the sixth largest importer of major weapons in the world. The US supplied 68 per cent of Australia's imports and Spain 19 per cent. Australia is modernising its armed forces but also acquiring weapons that significantly increase its long-range capabilities. Among the weapons imported in 2010–14 were 5 tanker aircraft and the first of 2 amphibious assault ships from Spain, along with 2 large transport aircraft and 4 airborne early warning (AEW) aircraft from the USA. Australia also received 26 combat aircraft from the USA, with 82 more on order (see box 3), as well as 8 anti-submarine warfare aircraft from the USA and 3 Hobart destroyers from Spain.[2] 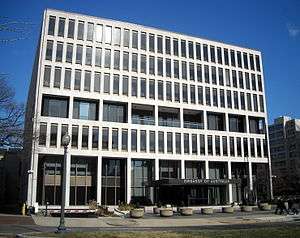 Embassy of Australia in Washington

Australia House, Canada, is an example of an Australian mission (it serves as the ambassadorial residence). As Canada is a fellow Commonwealth nation, Australia maintains a High Commission there.

Due to the One China Policy of the People's Republic of China, in Taiwan the Australian Commerce and Industry Office unofficially represents Australia's interest. It serves the functions similar to other Australian Consulates. It's now been renamed to Australian Office in Taiwan since 2012

Australia is a member of the Pacific Islands Forum and other regional organisations. It has High Commissions in Fiji, Kiribati, Nauru, New Zealand, Papua New Guinea, Samoa, the Solomon Islands, Tonga and Vanuatu. It has an embassy in the Federated States of Micronesia. Australia provides aid to many of its developing Pacific Islands neighbours, and to Papua New Guinea.

Australia's approach to the Pacific has included frequent references to what it has perceived as an "Arc of Instability" among its island neighbours. In August 2006 Australian Defence Minister Brendan Nelson stated to the Australian Parliament:

We cannot afford to have failing states in our region. The so-called 'arc of instability', which basically goes from East Timor through to the south-west Pacific states, means that not only does Australia have a responsibility in preventing and indeed assisting with humanitarian and disaster relief, but also that we cannot allow any of these countries to become havens for transnational crime, nor indeed havens for terrorism.[14]

As from early 2008, the Australian government led by Kevin Rudd began what it called a "new approach" to relations between Australia and the Pacific, appointing a Parliamentary Secretary for Pacific Island Affairs, Duncan Kerr. In February, Kerr and fellow Parliamentary Secretary for Foreign Affairs, Bob McMullan visited Samoa, Tonga and Kiribati in February, and stated:

"Broadly, the approach is one of much more partnership and engagement on the basis of mutual respect. We're not going to be lecturing or hectoring, we're going to try and work together with them and I think we set a pretty good standard with the way we started. The relationships we've established with ministers and leaders in those countries [Kiribati, Tonga and Samoa] is very positive."[15]

Relations with Fiji are strained due to Australia's condemnation of the military coup which overthrew the government of Prime Minister Laisenia Qarase in December 2006. Military leader and "interim Prime Minister" Voreqe Bainimarama accused Australia of "bullying" Fiji by applying sanctions and insisting on a swift return to a democratic government. In March 2008 the Fiji Human Rights Commission published a report which alleged that Australia might have been planning an armed intervention in Fiji in late 2006. Australian Foreign Minister Stephen Smith dismissed the allegations, and stated: "The best thing that can happen in Fiji is not spurious suggestions about Australian activity but having an election, returning Fiji to democracy, respecting human rights".[16]

Australian-Nauruan relations go back almost a century. Australia administered Nauru as a dependent territory from 1914 to 1968, and has remained one of Nauru's foremost economic and aid partners thereafter.

Relations between Australia and Nauru were essentially framed by the Pacific Solution, whereby Nauru housed a detention centre for unauthorised refugee applicants who had attempted to enter Australia, and Australia provided financial aid in return. The detention centre was closed by Australia in February 2008, causing Nauru to express concern regarding the future of its economy.

The relationship between Australia and New Zealand is exceptionally close on both the national and interpersonal scales.[19] This close relationship goes back to the time of the first World War and the ANZAC Spirit forged at Gallipoli. Former New Zealand Prime Minister Mike Moore declared that Australians and New Zealanders have more in common than New Yorkers and Californians.[20]

Papua New Guinea is Australia's closest neighbour, and former dependent territory. Relations between Canberra and Port Moresby are close, although there have been tensions in recent years. Papua New Guinea has developed much closer relations with Australia than with Indonesia, the only country it shares a border with. The two countries are Commonwealth realms, and Papua New Guinea benefits from economic development aid from Australia.

Under the government of John Howard, Australia's relations with Michael Somare's Papua New Guinea worsened, primarily because of the "Julian Moti affair", but also because of the "shoes episode".

Under the government of John Howard, Australia's relations with Manasseh Sogavare's Solomon Islands were strained, primarily because of the "Julian Moti affair". Sogavare notably accused Australia of conducting neo-colonialism in the Solomons via RAMSI. On 1 October 2007, the Solomon Islands' Foreign Affairs Minister Patteson Oti addressed the General Assembly of the United Nations, and accused Australia of undermining his country's sovereignty:

Mine is too nationalistic a government to become captive to the fortunes which justify our perpetual retention under siege. My [country's government] remain[s] unmoved by Australian resistance to our attempts to reclaim our sovereignty and independence.[21]

This led Australia to exercise its right of reply, denying the accusation.[22] Relations subsequently improved when both Howard and Sogavare lost office in December 2007, and their successors -Kevin Rudd and Derek Sikua- immediately set out to improve relations between Canberra and Honiara.

Following the 2006 riots in Tonga, Australia sent police officers, at Tonga's request, to help stabilise the situation in the kingdom.