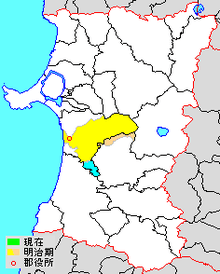 Kawabe District (河辺郡, Kawabe-gun) was a former rural district located in southern Akita, Japan. On October 1, 2005, its remaining components, the towns of Kawabe and Yūwa merged into the city of Akita, upon which Kawabe District was dissolved and ceased to exist as an administrative unit.

The area of Kawabe District was formerly part of Dewa Province, which was divided into the provinces of Ugo Province and Uzen Province following the Meiji restoration on January 19, 1869, with the area of Kawabe becoming part of Ugo Province. At the time, the area consisted of 59 villages all of which were formerly under the control of Kubota Domain. Akita Prefecture was founded on December 13, 1871. 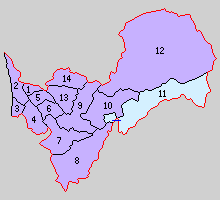 Kawabe was raised to town status on March 31, 1955, followed by Yūwa on April 1, 1972. On January 11, 2005, the towns of Kawabe and Yūwa were merged into the expanded city of Akita. Kawabe District was dissolved as a result of this merger.