Wilbur West was Michigan's first men's gymnastics coach. In three years under West, the team compiled a record of 1–10. After the 1933 season, the gymnastics program was discontinued and was not resumed until 1948.[2]

Newt Loken came to the University of Michigan in 1944 as a master's degree student. On the side, he coached the cheerleading team.[3] At the time of Loken's arrival, Michigan did not have a men's gymnastics program.[3] In 1947, the athletic board awarded varsity status to men's gymnastics, and Loken was named the head coach.[3]

Loken also coached the cheerleading team at Michigan as well as the varsity sport of trampoline. From 1947 through 1964, trampoline was included as an event in gymnastics competitions by both the AAU and NCAA. The first trampoline world championships were held in 1964. Loken led the Michigan trampoline team to NCAA championships in 1969 and 1970.[7] Loken produced more trampoline champions and world medal winners than any other collegiate coach.[8]

As of 2007, the 88-year-old Loken was still a regular at Michigan's men's gymnastics practices and events, and it was reported that he had not missed a Michigan home meet from 1948 to 2007.[3] Assistant coach Scott Vetere said: "He knows everybody on the team, and if he forgets, he's 80-some years old, and he'll ask again. He's just a pure gymnastics guy – always wants to be around gymnastics, always wants to learn more, (always) wants to praise guys for what a wonderful job they're doing."[3] 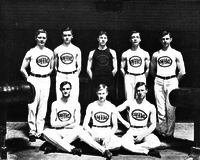 Bob Darden (1984–1996) was head coach for 13 seasons. During Darden's tenure as head coach, the Wolverines compiled a record of 76–111–1 and had no Big Ten championships or NCAA tournament berths.[2]

In 1999, Kurt Golder led the Wolverines to a 19–5 record in the regular season. The 1999 team went on to win the school's third team gymnastics championship with season-best 232.55 points in the NCAA tournament.[2][11] The runner up was Ohio State, which finished with 230.85 points.[11] Justin Toman was Michigan's leader at the 1999 tournament with a score of 58.075.[11] The NCAA championship came just three years after a winless season in 1996. Golder was credited with taking over the program and building it into "a national powerhouse."[11] Upon winning the 1999 NCAA championship, Golder told the press, "The plan was to get here in the fourth year and be in contention in the fifth year. We got lucky and got some great recruits. Everything fell into place."[11]

The 2009 Wolverines finished #2 as the runner-up at the NCAA tournament.[2] Michigan gymnast Thomas Kelley was named Big Ten Gymnast of the Year in 2009.[12]

The 2010 Wolverines won the NCAA men's gymnastics national championship, defeating the second place team from Stanford University by 0.7 points. Michigan gymnast Chris Cameron also won the all-around title with 90.500 points, including 15.450 on the rings and vaulting, 15.150 on parallel bars, 15.050 on pommel horse, and 13.800 on the horizontal bar.[13]

Michigan has had 18 gymnasts who have won NCAA individual championships.[6]

Michigan has had 18 gymnasts who have been a part of the USA National Team.[18]