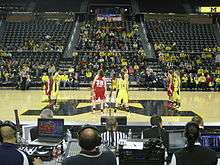 Michigan and Wisconsin preparing for the opening tip off for their January 13, 2013 game. 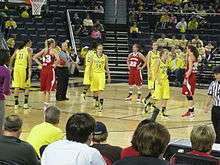 Michigan and Wisconsin in action during the second half of their January 13, 2013 game.

Michigan began playing intercollegiate women's basketball in 1973-74, when inaugural head coach Vic Katch led the team to a 3-8 record (0-1 against Big Ten teams).[4] There was no form of conference competition for the Wolverines until the 1976-77 season, and even then it was not officially sanctioned by the Big Ten until 1982-83.[4] Michigan did not qualify for postseason play until earning an NCAA Tournament bid in 1990 under head coach Bud VanDeWege, which would remain its only tournament appearance until Sue Guevara led the Wolverines to five straight postseason appearances (in both the NCAA and WNIT tournaments) between 1998 and 2002.[4] The team's best postseason performance in the NCAA Tournament is advancing to the Second Round, which it has done three times, in 1990, 2001 and 2013.[4] The Wolverines have also reached the WNIT semifinals twice, in 2010 under coach Kevin Borseth and in 2015 under Kim Barnes Arico.[4] Michigan has never won a Big Ten championship, either in the regular season or in the conference tournament: the closest it has come is 2nd in the regular season and tied for 3rd in the tournament, both accomplished during Guevara's tenure.[4] Guevara is the most accomplished coach in the history of the program, leading all coaches in both wins and winning percentage for conference and overall games alike.[5] Since 2012, the Wolverines are coached by Kim Barnes Arico, the former St. John's Red Storm head coach and two-time Big East Coach of the Year.[1] 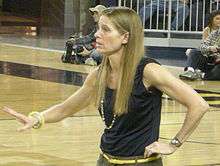 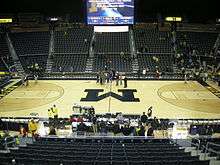 Michigan has played its home games at Crisler Center (previously known as Crisler Arena) since it began intercollegiate play during the 1973-74 season.[2] The first women's basketball game played at Crisler took place on February 4, 1974 and saw the Western Michigan Broncos defeat Michigan 54-28.[2] Crisler Arena was built in 1967 at a cost of $7.2 million, and has undergone three major renovations since, in 1998, 2001, and 2012.[2] In 2002, the women's locker room was more than doubled in size and given a complete facelift.[2] The 2012 renovation saw the addition of the William Davidson Player Development Center (WDPDC), a 57,000-foot basketball facility for both the women's and men's teams adjacent to the arena proper, and the renaming of the entire complex to Crisler Center.[2] The first floor of the WDPDC houses two basketball practice courts, team locker rooms for both players and coaches, athletic medicine facilities, and an equipment room, while the second floor is home to offices for both the men's and women's coaching staffs and administrative functions, as well as rooms dedicated to recruiting, analyzing game film, and strength and conditioning.[2] The 2012 renovation also resulted in major upgrades to the arena's infrastructure, a new scoreboard, replacement of all the seats in both the upper and lower bowls, more handicap-accessible seating, and major improvements to the arena's entrances and concourses.[2] Completed in two separate phases, it cost $72 million in total.[2]