Amb was a princely state of the former British Indian Empire ruled over by the Tanoli tribe. Following Pakistani independence in 1947, and for some months afterwards, Amb's Nawab remained unaligned. However, at the end of December 1947 he acceded to Pakistan, while retaining internal self-government. Amb continued as a Princely state of Pakistan until 1969, when it was incorporated into North West Frontier Province (now Khyber-Pakhtunkhwa).

In 1972, recognition of the royal status of the Nawab was ended by the Government of Pakistan.[1]

Amb and its surrounding areas have a history dating to the invasion of the region by Alexander the Great in the fourth century BC. Alexander's historian, Arrian, did not indicate the exact location of Embolina, the progenitor of Amb, but it may have been in the vicinity of Aoronos, Alexander's supply depot on the right bank of the River Indus. The mention in Ptolemy's Geography of Embolina as a town of Indo-Scythia situated on the Indus River supports this theory.

In 1854 British frontier officer General James Abbott postulated that Aornos was located on the Mahaban range south of modern Buner District. He proposed, as had Ranjit Singh's mercenary General Claude Auguste Court in 1839, to recognise Embolina as the village of Amb situated on the right bank of the Indus eight miles east of Mahaban. This is the location from which the Nawabs of Amb took their title.[2]

Amb State, once known as Mulk e Tanawal (country/area of Tanawal), was the home of the Tanoli people. The early history of the region goes back to the centuries before the Mughal Empire, when in the early fourteenth century the Tanoli tribe conquered it and settled here on the banks of the Indus River and a wide area around it, which thus came to be known as Tanawal. 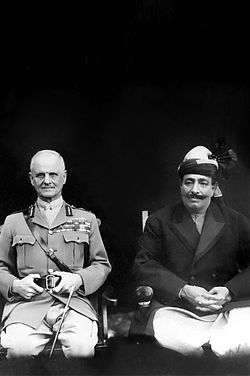 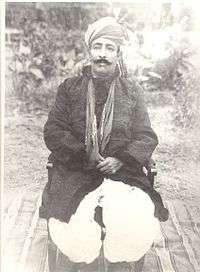 From early on, the Tanawal area by and large remained relatively free from the influence of the Mughals, Sikhs and British; and beyond paying occasional simple taxes to central authorities, the people of Tanawal had little or no contact with the outside world for a long period. 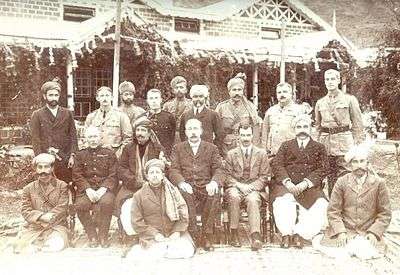 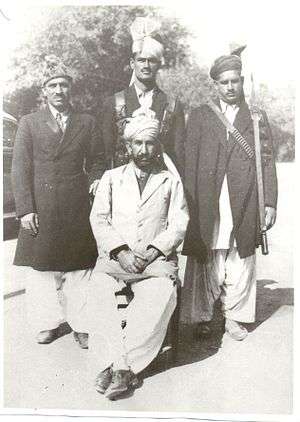 There are two prominent theories about the descent of Hindwal Tanolis; one relates them to Pashtun origin[3] and the other to Turco-Mongol. 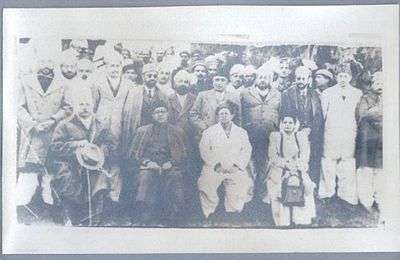 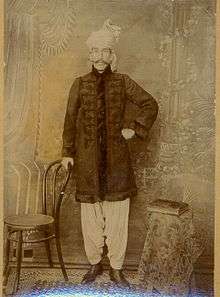 Painda Khan: Mir Painda Khan is famed for his staunch rebellion against Maharaja Ranjit Singh's governors of Hazara. He was the son of Mir Nawab Khan.

From about 1813, Painda Khan spent a lifelong rebellion against the Sikhs, who, realising the potential dangers of his rebellion, set up forts at strategic locations to keep him in check. Hari Singh Nalwa took this initiative during his governorship. In order to consolidate his hold on Tanawal and to unite the Tanoli people, Painda Khan had to first contend with his major rivals within the tribe itself, i.e. the chiefs of the Suba Khani/Pallal section, whom he subdued after a bitter struggle.

Painda Khan set the tone for the regional resistance in Upper Hazara against Sikh rule. In 1828 he created and gifted the smaller neighbouring state of Phulera to his younger brother Madad Khan.

Painda Khan also briefly took over the valley of Agror in 1834. The Swatis inhabiting it appealed to Sardar Hari Singh, who was unable to help them but in 1841,[4] Hari Singh's successor restored Agror to Ata Muhammad Khan, the chief of that area, a descendant of the Mullah Akhund Sad-ud-din.

Jehandad Khan: Was the son of Mir Painda Khan. In 1852, Jehandad Khan was summoned by the President of the Board of Administration in relation to a murder enquiry of two British officers, supposedly on his lands. In fact, this related to the murder of two British Salt Tax collectors by some tribesmen in the neighbouring Kala Dhaka or Black Mountain area, which eventually led to the punitive First Black Mountain campaign/expedition of 1852. The President of the Board of Administration was Sir John Lawrence, later to be the Lieutenant-Governor of the Punjab, and he visited Haripur, in Hazara, where he invited many Hazara chiefs to see him, on various matters, at a general Durbar.[5] Jehandad Khan was able successfully to establish his innocence and consolidate his position.

Jahandad Khan's relationship with British India is summed in the following lines in a letter dated 8 January 1859 from R. Temple, Secretary to the Chief Commissioner of the Punjab, addressed to the Financial Commissioner of the Punjab: "'5. The term "Jagir" has never appeared to me applicable in any sense to this [Jehandad Khan's] hereditary domain [Upper Tannowul], for it was never granted as such by the Sikhs or by our Government; we upheld the Khan as we found him in his position as a feudal lord and large proprietor.'

Jehandad's son, Nawab Bahadur Sir Muhammed Akram Khan, was given the title of Nawab in perpetuity by the British.

Nawab Sir Muhammad Akram Khan: The next chief of the Tanolis, a son of Mir Jahandad Khan, was Nawab Sir Akram Khan KCSI 68–1907). He was a popular chief, and it was during his tenure that the fort at Shergarh was constructed, along with Dogah and Shahkot Forts. His rule was a peaceful time for Tanawal, with no major conflicts.

Nawab Sir Muhammad Farid Khan: Nawab Sir Muhammad Farid Khan KBE had good relations with Muhammad Ali Jinnah and Nawabzada Liaqat Ali Khan. His contributions to the Pakistan movement have been acknowledged by letters from the Quaid e Azam.[6][7] In 1947 the Nawab of Amb, Mohammad Farid Khan, acceded his state to Pakistan by signing the Instrument of Accession in favour of Pakistan. In 1969, the State was incorporated into the North West Frontier Province (now Khyber-Pakhtunkhwa) and in 1971 the Government of Pakistan ceased to recognize the royal status of the Nawab .

Nawabzada Salahuddin Saeed Khan: Nawabzada Salahuddin is the present titular Chief of Tanolis and the nominal Nawab of Amb (titular/courtesy only)[9] He is the son of Nawab Muhammad Saeed Khan. He holds the record of being the youngest parliamentarian ever to be elected to the National Assembly of Pakistan and then went on to be elected five times to the National Assembly of Pakistan (from 1985 to 1997), a feat only achieved by seven other Pakistani parliamentarians, including the former Pakistani prime minister Nawaz Sharif.[10]

Existing alongside British India were hundreds of Princely States, some 565[12] in all, but most of them did not issue postage stamps. Only around forty of the States issued their own postage stamps, and Amb State was one of them, having its own Postal Service. The rest used the stamps of the All India Postal Service. 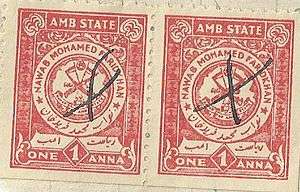