Paralympic football consists of adaptations of the sport of association football for athletes with a physical disability. These sports are typically played using International Federation of Association Football (FIFA) rules, with modifications to the field of play, equipment, numbers of players, and other rules as required to make the game suitable for the athletes.

5-a-side football, also known as futsal and blind football, is an adaptation of football for athletes with visual impairments including blindness. The sport, governed by the International football Sports Federation (IBSA), is played with modified FIFA rules. The field of play is smaller, and is surrounded by boards. Teams are reduced to five players, including the goalkeeper, per team. Teams may also use one guide, who is positioned off the field of play, to assist in directing players. The ball is equipped with a noise-making device to allow players to locate it by sound. Matches consist of two 25-minute halves, with a ten-minute break at half-time. 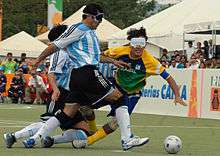 Brazil vs. Argentina in the Final of the Football for 5 at the 2007 Parapan American Games in Rio de Janeiro

Football 5-a-side players are assigned to one of three sport classes based on their level of visual impairment:

Teams are permitted to use sighted athletes as goalkeepers and guides; sighted goalkeepers cannot have been registered with FIFA for at least five years.

Two types of competition exist. For Class B1 games, only athletes with sport class B1 are permitted as players, with the exception of the goalkeepers and the guides, who may be class B2, B3, or sighted. For Class B2/B3 games, teams can field players in sport classes B2 and B3; at least two B2 players must be on the field at all times.

7-a-side football is an adaptation of association football for athletes with cerebral palsy and other neurological disorders, including stroke and traumatic brain injury. The sport is governed by the Cerebral Palsy International Sports and Recreation Association (CP-ISRA). The sport is played with modified FIFA rules. Among the modifications are a reduced field of play, a reduction in the number of players, elimination of the offside rule, and permission for one-handed throw-ins. Matches consist of two thirty-minute halves, with a fifteen-minute half-time break.

Players competing in 7-a-side football are given a sport class based on their level of disability. Eligible classes are:

Teams must field at least one class C5 or C6 player at all times. No more than one players of class C8 are permitted to play at the same time.

American comedian Josh Blue was a member of the US team at the 2004 Summer Paralympics and the 2007 ParaPanAmerican Games.