Holmes was born in Mölnbacka in Forshaga Municipality in Värmland, Sweden. In 1886, when he was 4 years old,[1] Holmes immigrated to the United States with his parents, who settled in Worcester, Massachusetts.

Holmes attended the Millbury Street School public school until he was 14.[1]

When he turned 14 Holmes left school and went to work for the Reed and Prince Manufacturing Co. of Worcester where he “tended machines”.[1] Holmes also worked at the Brunell Electroplating plant, where he learned the business of Electroplating. In 1909 Holmes established his own Electroplating firm, the Holmes Electrotype Foundry.[1] 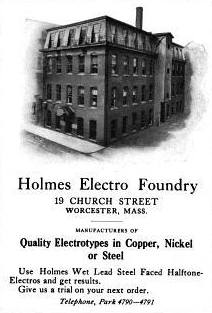 Holmes also engaged in the banking and insurance business.

Worcester Common Council and Board of Aldermen

Holmes served as a member of the Massachusetts Executive Council, Seventh Councilor district from 1925[2] to 1928. 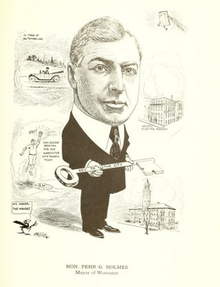 Caricature of Holmes from 1917, when he was the Mayor of Worcester, Massachusetts.

Holmes returned to Worcester and his electrotype business. Holmes died in Venice, Florida, his interment was in the Old Swedish Cemetery in Worcester.