Martin Thomas "Marty" Meehan (born December 30, 1956) is the current President of the University of Massachusetts, a position he assumed on July 1, 2015. A Democrat, Meehan served in the United States House of Representatives from 1993 to 2007 as the representative for Massachusetts's 5th congressional district, and as Chancellor of the University of Massachusetts Lowell from 2007 to 2015. He served as the deputy secretary of state for securities and corporations from 1986 to 1990. In 1991, he became first assistant district attorney for Middlesex County, managing a staff of more than 150, including 80 prosecutors.

Meehan was born in Lowell, Massachusetts, the eldest son among seven children born to Martin T. Meehan (d. 2000), a compositor for The Lowell Sun, and Alice (Britton) Meehan (d. 2008).[1] He attended public schools in Lowell, graduating from Lowell High School in 1974.

Meehan attended the University of Massachusetts Lowell, graduating in 1978 with a Bachelor of Science degree in education and political science. Meehan went on to earn a Master of Public Administration degree from Suffolk University in 1981 and a Juris Doctor from the Suffolk University Law School in 1986. He holds honorary degrees from the American College of Greece,[2] Suffolk University, Green Mountain College in Vermont and Shenkar College of Engineering & Design in Israel.

In 1996 he married Ellen T. Murphy. She later served as the vice president at Lawrence General Hospital. They have two children together: Daniel Martin and Robert Francis.

On May 1, 2015, the University of Massachusetts Board of Trustees unanimously elected Meehan president of the UMass System. Meehan had served as Chancellor of his alma mater University of Massachusetts Lowell.[4][5] for eight years prior to his rise to the presidency of UMass. Trustees cited Meehan's record of achievement while serving as the Chancellor at UMass Lowell, his record of public service throughout his career, "and his ability to communicate and to inspire as being among the reasons for selecting him as the university’s 27th president." [6] Meehan is the first UMass undergraduate alumnus to serve as President of the five-campus, 73,000-student system. Meehan officially started his service as president on July 1, 2015.

Meehan was inaugurated at the Edward M. Kennedy Institute for the United States Senate on November 12, 2015 where he vowed to fight for the University of Massachusetts, calling it “the most important institution in Massachusetts in the critical areas of social mobility and economic growth." [7] Meehan made raising money for scholarship funds the centerpiece of his inauguration. With an initial fundraising target of $1 million, the privately funded inauguration far exceeded its goals and generated a record $1.7 million for student scholarships.[8]

In his first year of presidency, the university’s enrollment reached a record 73,744 students and UMass announced that research expenditures had risen to a high of $629 million. UMass increased its own funding of financial aid by nearly $20 million during Meehan’s first year, with spending rising from $236 million to a record $255 million, the highest ever. Additionally, the UMass Foundation, in part based on Meehan’s recommendation, voted to divest direct investments in fossil fuels from the university’s endowment, making it the first major public university in the nation to take such action.[9]

As he began his second year as president of the university, Meehan announced the closing of his congressional campaign and directed that funds be transferred to an education foundation and that a $1 million scholarship donation be made to his alma mater, UMass Lowell.[10]

During his years at UMass Lowell, the institution achieved record growth in enrollment, student retention and funding for research and scholarships.[11]

During his tenure as chancellor, UMass Lowell for the first time was named a top-tier national university.[12] It also was the top-ranked public research institution in New England for starting salary, mid-career salary and overall return on investment for graduates according to PayScale.com.[13] Under Meehan’s leadership, UMass Lowell opened 10 new buildings over a five-year period, was named to the President’s Higher Education Honor Roll for community service and campus engagement [14] for six years in a row and made a successful transition to NCAA Division I athletics.[15]

Meehan was presented with the Association of College Unions International (ACUI) 2014 President of the Year Award at the organization’s 100th anniversary celebration and conference. He was honored by the Council for Advancement and Support of Education (CASE) at the annual District I program in 2012 with the Chief Executive Leadership Award.[16][17]

Interspersed with his post-college studies, Meehan held a number of political positions. From 1978 to 1979 Meehan served on the staff to Lowell mayor Raymond F. Rourke. He was the press assistant to Representative James Shannon from 1979 to 1981 and the head research analyst for the Massachusetts Senate's joint committee on election laws from 1981 to 1984.

After completing his law degree, Meehan served as director of public affairs to the Massachusetts Secretary of the Commonwealth and Deputy Secretary of State for Securities and Corporations from 1986 to 1990. From 1987 to 1988, Meehan was a member of the faculty of the University of Massachusetts Lowell and Harvard Law School. From 1991 to 1992, Meehan was the First Assistant District Attorney for Middlesex County, where he established an innovative “priority prosecution” policy that targeted hardened criminals.

Meehan ran for the U.S. House in the 1992 election and was elected on November 3, 1992. He took office in January 1993. Meehan is generally considered to be a political liberal. Meehan is a prominent advocate for campaign finance reform and was one of the major sponsors of Bipartisan Campaign Reform Act (called the "Shays-Meehan Bill" in the House and the "McCain-Feingold Bill" in the Senate). He has also been noted for his activism on gay rights issues; for example, Meehan is the chief sponsor of the measure repealing the don't ask, don't tell policy.

On October 10, 2002, Marty Meehan was among the 81 House Democrats who voted in favor of authorizing the invasion of Iraq.[18] In January 2005, nearly three years after the fall of Saddam Hussein’s regime and as U.S. troops faced an “increasingly sophisticated insurgency in Iraq,” Meehan published a Congressional white paper [19] advocating that Iraqi security responsibilities be transferred to a new democratically elected government and that the U.S. develop an exit strategy to remove troops within 12 months to 18 months. During a discussion panel at the Brookings Institution,[20] Meehan expressed concerns about the Bush administration having “no endgame in sight.” He told the panel that “it's time for Congress to reassert its role in foreign policy and to take the lead in providing an exit strategy in Iraq.”

Meehan's campaign fund was among the largest campaign accounts of any House member, with $4,829,540 cash on hand reported on October 15, 2005. This is the result of raising more money than he spent in several campaigns since his first in 1992. In 2016, after his first year as president of UMass, Meehan closed his congressional campaign signaling an end to his political career so he could focus his energies on leading the UMass system.[21]

Meehan was mentioned as a possible candidate for the U.S. Senate in 2004, if Massachusetts' junior senator, John Kerry, had been elected to the presidency.[23] 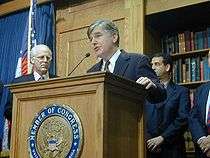 Meehan successfully ran for the House in 1992 on a platform of reform, including a commitment to pushing through term limits for members of the House. As part of that platform, Meehan made a pledge not to serve more than four terms. On the House floor in 1995 he scolded members who might go back on their promise to limit their tenure in office. "The best test of any politicians' credibility on term limits," he said, "is whether they are willing to put their careers where their mouths are and limit their own service." Despite his pledge, Meehan again ran for Congress in the year 2000, exceeding four terms.[24]

Meehan came under intense criticism in the days following the terrorist attacks on September 11, 2001, when the Boston Herald reported that he criticized President Bush for not returning to Washington, D.C., sooner than he did after the attacks.[25] Meehan was quoted as saying "I don't buy the notion Air Force One was a target ... That's just PR. That's just spin."[26] Following that incident, Lowell police posted a guard outside Meehan's congressional district office after receiving reports of threatening phone calls. Meehan later recanted his views and said that he believed at that time that Bush had done "an excellent job."[27] Later, both the 9/11 Commission Report, issued in 2004, and President Bush’s White House Communications director Dan Barrett acknowledged Air Force One was not a target of the attacks.[28][29]

An unidentified individual operating through the U.S. House of Representatives' internet connection made several favorable edits as well as removing statements declaring Meehan's original campaign platform that included a promise not to run for more than four terms. Meehan's chief of staff at the time, Matt Vogel, admitted to the press that he oversaw the edits and removal of the section that pointed out Meehan's decision not to step down from office after four terms.[30]

On May 9, 2007, Meehan delivered an official resignation statement to the Speaker of the House, Rep. Nancy Pelosi (D-CA), indicating that he would leave his post on July 1 of the same year.[31] In response, Gov. Deval Patrick (D-MA) announced a September 4 primary and an October 16 special election to determine Meehan's successor. The eventual winner was Niki Tsongas, the widow of Paul Tsongas, one of Meehan's predecessors.

Meehan had been mentioned as a potential candidate to succeed Ted Kennedy in the United States Senate.[32][33] In a letter to staff and students at the University of Massachusetts Lowell, he stated,

"After careful consideration and many conversations with my family and close supporters, I have decided not to run for the U.S. Senate at this time. While I am not ruling out the possibility of seeking public office in the future, I am fortunate to be leading a remarkable university that I love, and I just don’t want to walk away."[34]