John Jacob Rogers (August 18, 1881 – March 28, 1925) was a member of the United States House of Representatives from Massachusetts.

Rogers was born in Lowell, Massachusetts and graduated from Harvard University in 1904 and from Harvard Law School in 1907. He practiced law in Lowell, starting in 1908. Rogers was a member of the Lowell city government in 1911, school commissioner in 1912, and was elected as a Republican to the Sixty-third and to the six succeeding Congresses and served from March 4, 1913, until his death. During the First World War, Rogers enlisted on September 12, 1918, as a private with the Twenty-ninth Training Battery, Tenth Training Battalion, Field Artillery, Fourth Central Officers’ Training School, and served until honorably discharged on November 29, 1918.

Rogers died in Washington, D.C. of appendicitis[2] on March 28, 1925, and was interred at Lowell Cemetery in Lowell, Massachusetts.

His wife, Edith Nourse Rogers, succeeded him in Congress. 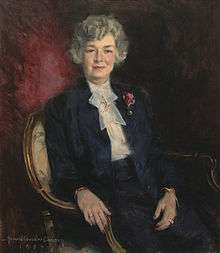