William Cogswell (August 23, 1838 – May 22, 1895) was a U.S. Representative from Massachusetts and a colonel in the Union Army during the American Civil War who was awarded the honorary grade of brevet brigadier general, U.S. Volunteers.

Cogswell was born in Bradford, Massachusetts, to George Cogswell and Abigail (Parker) Cogswell. Cogswell's father was a well-respected surgeon and one of the founders of the Massachusetts Republican Party. His grandfather, William Cogswell, was a surgeon's mate in the Revolutionary War who practiced medicine in Atkinson, New Hampshire, and gave land for the Atkinson Academy. Abigail's mother died when he was about 7 years old.

Cogswell entered Dartmouth in 1855, leaving it soon after. From 1856 to 1857 he went on a voyage around the world, spending two years as a sailor. When Cogswell returned from his voyage he entered Harvard Law School.

On September 8, 1860, Cogswell was admitted to the bar in Essex County, Massachusetts. He worked for a while in the office of Attorney William D. Northend, and in April 1861 Cogswell opened his own office in Salem, Massachusetts. 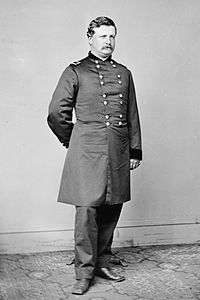 On April 19, 1861, word reached Salem that the Sixth Massachusetts had been attacked in Baltimore while on its way to defend Washington, D.C. Cogswell turned his office into a recruiting station and in 24 hours raised a full company, the first company in the country recruited for the war. This became Company C of the Second Massachusetts Volunteers, with Cogswell as captain in command.

Cogswell was commissioned a captain in the Second Massachusetts Volunteer Infantry Regiment, May 11, 1861. He was promoted to lieutenant colonel on October 23, 1862, and to colonel on June 25, 1863.

Colonel Cogswell was brevetted Brigadier General of Volunteers by appointment of the President on December 12, 1864, to rank from December 15, 1864, and the award of this honorary grade was confirmed by the U.S. Senate on February 14, 1865.[2] Colonel and Brevet Brigadier General Cogswell was mustered out of the U.S. Volunteers on July 24, 1865.[3]

Return to the practice of law

After the Civil War Cogswell resumed the practice of his profession.

Cogswell was elected as a Republican to the 50th United States Congress and to the four succeeding congresses and served from March 4, 1887, until his death in Washington, D.C., May 22, 1895. He was interred in Harmony Grove Cemetery, Salem, Massachusetts.