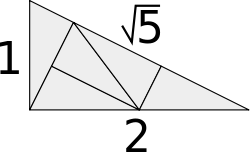 be the right triangle with side length

The increasing sequence of triangles which defines the Conway tiling of the plane.

By suitably rescaling and translating/rotating, this operation can be iterated to obtain an infinite increasing sequence of growing triangles all made of isometric copies of

. The union of all these triangles yields a tiling of the whole plane by isometric copies of

In this tiling, isometric copies of

appears in infinitely many orientations (this is due to the angles

). Despite this, all the vertices have rational coordinates. 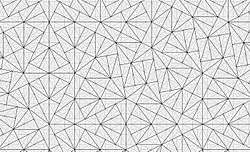 , in which a tile may intersect another tile only either on a whole side or on half the length

side, and such that the following property holds. Given any pinwheel tiling

, there is a pinwheel tiling

which, once each tile is divided in five following the Conway construction and the result is dilated by a factor

The tiling constructed by Conway is a pinwheel tiling, but there are uncountably many other different pinwheel tiling. They are all locally undistinguishable (i.e., they have the same finite patches). They all share with the Conway tiling the property that tiles appear in infinitely many orientations (and vertices have rational coordinates).

The main result proven by Radin is that there is a finite (though very large) set of so-called prototiles, with each being obtained by coloring the sides of

Radin and Conway proposed a three-dimensional analogue which was dubbed the quaquaversal tiling.[2] There are other variants and generalizations of the original idea.[3]

One gets a fractal by iteratively dividing 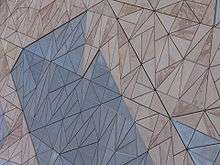 Federation Square, a building complex in Melbourne, Australia, features the pinwheel tiling. In the project, the tiling pattern is used to create the structural sub-framing for the facades, allowing for the facades to be fabricated off-site, in a factory and later erected to form the facades. The pinwheel tiling system was based on the single triangular element, composed of zinc, perforated zinc, sandstone or glass (known as a tile), which was joined to 4 other similar tiles on an aluminum frame, to form a "panel". Five panels were affixed to a galvanized steel frame, forming a "mega-panel", which were then hoisted onto support frames for the facade. The rotational positioning of the tiles gives the facades a more random, uncertain compositional quality, even though the process of its construction is based on pre-fabrication and repetition. The same pinwheel tiling system is used in the development of the structural frame and glazing for the "Atrium" at Federation Square, although in this instance, the pin-wheel grid has been made "3-dimensional" to form a portal frame structure.