Conway calls it a isosnub quadrille.[1]

There are 3 regular and 8 semiregular tilings in the plane. This tiling is similar to the snub square tiling which also has 3 triangles and two squares on a vertex, but in a different order.

It is also the only uniform tiling that can't be created as a Wythoff construction. It can be constructed as alternate layers of apeirogonal prisms and apeirogonal antiprisms.

There is one uniform colorings of an elongated triangular tiling. Two 2-uniform colorings have a single vertex figure, 11123, with two colors of squares, but are not 1-uniform, repeated either by reflection or glide reflection, or in general each row of squares can be shifted around independently. The 2-uniform tilings are also called Archimedean colorings. There are infinite variations of these Archimedean colorings by arbitrary shifts in the square row colorings.

The elongated triangular tiling can be used as a circle packing, placing equal diameter circles at the center of every point. Every circle is in contact with 5 other circles in the packing (kissing number).[2] 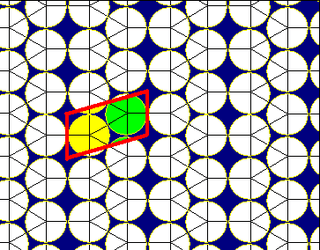 It is first in a series of symmetry mutations[3] with hyperbolic uniform tilings with 2*n2 orbifold notation symmetry, vertex figure 4.n.4.3.3.3, and Coxeter diagram

. Their duals have hexagonal faces in the hyperbolic plane, with face configuration V4.n.4.3.3.3.

There are four related 2-uniform tilings, mixing 2 or 3 rows of triangles or squares.[4][5]

The prismatic pentagonal tiling is a dual uniform tiling in the Euclidean plane. It is one of 15 known isohedral pentagon tilings. It can be seen as a stretched hexagonal tiling with a set of parallel bisecting lines through the hexagons.

It is related to the Cairo pentagonal tiling with face configuration V3.3.4.3.4.

There are four related 2-uniform dual tilings, mixing in rows of squares or hexagons.