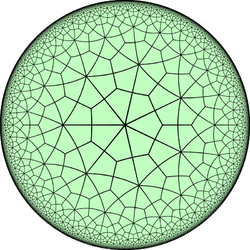 From a Wythoff construction there are eight hyperbolic uniform tilings that can be based from the regular heptagonal tiling.

This tiling is topologically related as a part of sequence of cantellated polyhedra with vertex figure (3.4.n.4), and continues as tilings of the hyperbolic plane. These vertex-transitive figures have (*n32) reflectional symmetry.

This article is issued from Wikipedia - version of the 6/4/2015. The text is available under the Creative Commons Attribution/Share Alike but additional terms may apply for the media files.