In geometry, the truncated trihexagonal tiling is one of eight semiregular tilings of the Euclidean plane. There are one square, one hexagon, and one dodecagon on each vertex. It has Schläfli symbol of tr{3,6}.

The truncated trihexagonal tiling has three related 2-uniform tilings, one being a 2-uniform coloring of the semiregular rhombitrihexagonal tiling. The first dissects the hexagons into 6 triangles. The other two dissect the dodecagons into a central hexagon and surrounding triangles and square, in two different orientations.[2][3]

The Truncated trihexagonal tiling can be used as a circle packing, placing equal diameter circles at the center of every point. Every circle is in contact with 3 other circles in the packing (kissing number).[4] Circles can be alternatedly colored in this packing with an even number of sides of all the regular polygons of this tiling. 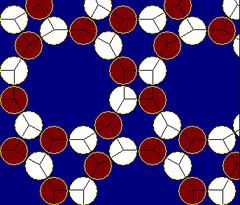 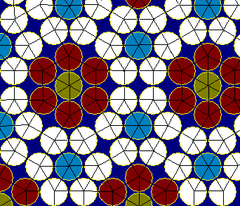 Conway calls it a kisrhombille[1] for his kis vertex bisector operation applied to the rhombille tiling. More specifically it can be called a 3-6 kisrhombille, to distinguish it from other similar hyperbolic tilings, like 3-7 kisrhombille. 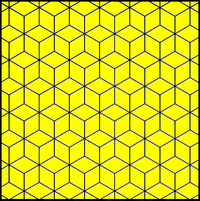 It is labeled V4.6.12 because each right triangle face has three types of vertices: one with 4 triangles, one with 6 triangles, and one with 12 triangles.

The kisrhombille tiling is a useful starting point for making paper models of deltahedra, as each of the equilateral triangles can serve as faces, the edges of which adjoin isosceles triangles that can serve as tabs for gluing the model together.

This tiling can be considered a member of a sequence of uniform patterns with vertex figure (4.6.2p) and Coxeter-Dynkin diagram

. For p < 6, the members of the sequence are omnitruncated polyhedra (zonohedra), shown below as spherical tilings. For p > 6, they are tilings of the hyperbolic plane, starting with the truncated triheptagonal tiling.