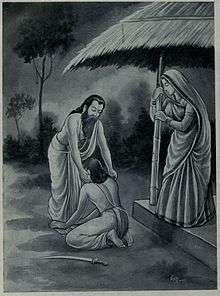 A young man displays pranama to an elderly.

Pranama (प्रणाम praṇāma) is a form of "respectful salutation" or "reverential bowing" before something, or another person - usually grandparents, parents, elders or teachers or someone deeply respected such as a deity. It is found in Indian culture.[1]

Pranama is derived from Pra (Sanskrit: प्र) and Anama (Sanskrit: आनम); pra as prefix means "forward, in front, before, very, or very much", while Anama means "bending or stretching".[2] Combined pranama means "bending, bowing in front" or "bending much". In cultural terms, it means "respectful salutation" or "reverential bowing" before another, usually elders or teachers or someone deeply respected such as a deity. 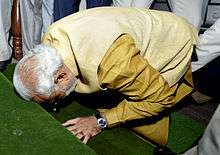 Narendra Modi, expressing Pranama on the steps leading to the parliament, on the first day after taking oath as the prime minister of India.

There are six types of Pranam:[3]

A form of pranama is Charanasparsha (Sanskrit: चरणस्पर्श, lit. touching the feet) a bowing combined with the touching of the feet, as a mark of respect. It may be seen in temples during darshan. This related type of pranama is most common in Indian culture. It is done in order to show respect towards elderly people like parents, grandparents, elderly relatives, teachers and saints.