For other uses, see Japa (disambiguation). 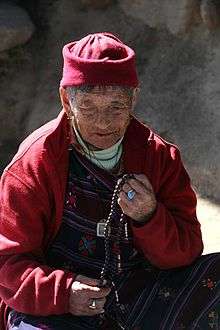 Japa (Sanskrit: जप) is the meditative repetition of a mantra or a divine name. It is a practice found in Buddhism,[1] Hinduism,[2] Jainism[3] and Sikhism.[4][5]

The mantra or name may be spoken softly, enough for the practitioner to hear it, or it may be spoken within the reciter's mind. Japa may be performed while sitting in a meditation posture, while performing other activities, or as part of formal worship in group settings.

The Sanskrit word japa is derived from the root jap-, meaning "to utter in a low voice, repeat internally, mutter".[6]

Monier-Williams states that the term appears in Vedic literature such as in the Aitereya Brahmana (Rigveda) and the Shatapatha Brahmana (Yajurveda).[7] The term means muttering, whispering or murmuring passages from the scripture, or charms, or names of deity.[7] Often it is the repetitive singing of a verse or mantra, sometimes counted with the help of a rosary which is called Japa-mala.[7] A related word, Japana appears in Book 12 of the Mahabharata, where muttering prayers is described as a form of religious offering.[7]

The concept of Japa is also found in early Buddhist texts, and is very common in Tibetan Buddhism literature.[8] 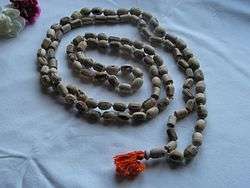 Japa Mala, or Japa beads, consisting of 108 beads plus the head bead.

One method of Japa is mental repetition of a mantra (or "mantram"), such as a method recommended by Eknath Easwaran.[9]

In some forms of japa, the repetitions are counted using a string of beads known as a japa mala. Many different types of materials are used for japa. The number of beads in the japa mala is generally 108. It is not uncommon for people to wear japa beads around their neck, although some practitioners prefer to carry them in a bead-bag in order to keep them clean.

Tibetan Buddhists include japa meditation as a large part of their religious practices. In Tibet, states Harvey Alper, the prayer wheels are instruments for japa.[10] The practice of nembutsu in Pure Land Buddhism is analogous to japa.

Analogues in other traditions

Some Catholic prayer forms that involve repetition of prayers, such as use of the Rosary or one of various chaplets, are similar to, but not "japa", because the aim is different. Mental methods of repeated short prayers, very similar to japa are also used in Christian traditions, most notably the practice of repeating the Jesus Prayer found in the Eastern Orthodox Church.[11][12] The practice of dhikr by Sufis is similar to japa.

The stated aim, or goal of japa may vary greatly depending on the mantra involved and the religious philosophy of the practitioner. In both Buddhist and Hindu traditions mantras may be given to aspirants by their guru, after some form of initiation. The stated goal could be moksha, nirvana, bhakti, or simple personal communion with a divine power in a similar way to prayer. Many gurus and other spiritual teachers, and other religious leaders, especially Hindu and Buddhist, teach that these represent different names for the same transformed state of consciousness. However, this claim is not made about mantras that are not intended for spiritual growth and self-realization.[13]

After long use of a mantra that is intended to foster self-realization or intimacy with a divine power, an individual may reach a state of ajapajapam. In ajapajapam, the mantra "repeats itself" in the mind.[9] Similar states have been reached by adherents to other major faith traditions, using prayers from their own traditions.

Japa is an important part of Sikh worship practices. The two main Sikh scriptures open with sections, named after the term, and these are called Japji Sahib and Jaap Sahib.[14]