For other uses, see Arti (disambiguation).

Aarti also spelled arti, arati, arathi, aarthi (In Devanagari: आरती ārtī) is a Hindu religious ritual of worship, a part of puja, in which light from wicks soaked in ghee (purified butter) or camphor is offered to one or more deities. Aartis also refer to the songs sung in praise of the deity, when lamps are being offered.

Aarti is derived from the Sanskrit word ārātrika (आरात्रिक), which means something that removes rātrī, darkness (or light waved in darkness before an icon).[1][2][3] Another word from which Aarti is thought to be derived is the Sanskrit word Aaraartikyam (Sanskrit: आरार्तिक्यं). A Marathi language reference says[4] it is also known as Mahaneeranjana (Sanskrit: महानीराञ्जना)[5]

Aarti is said to have descended from the Vedic concept of fire rituals, or homa. In the traditional aarti ceremony, the flower represents the earth (solidity), the water and accompanying handkerchief correspond with the water element (liquidity), the lamp or candle represents the fire component (heat), the peacock fan conveys the precious quality of air (movement), and the yak-tail fan represents the subtle form of ether (space). The incense represents a purified state of mind, and one’s "intelligence" is offered through the adherence to rules of timing and order of offerings. Thus, one’s entire existence and all facets of material creation are symbolically offered to the Lord via the aarti ceremony.[6] The word may also refer to the traditional Hindu devotional song that is sung during the ritual.

Aarti can be simple to extravagant, but always involves flame or light. It is sometimes performed one to five times daily, and usually at the end of a puja (in southern India) or bhajan session (in northern India). It is performed during almost all Hindu ceremonies and occasions. It involves the circulating of an 'Aarti plate' or 'Aarti lamp' around a person or deity and is generally accompanied by the congregation singing songs in praise of that deva or person (many versions exist). In doing so, the plate or lamp is supposed to acquire the power of the deity. The priest circulates the plate or lamp to all those present. They cup their down-turned hands over the flame and then raise their palms to their forehead – the purificatory blessing, passed from the deva's image to the flame, has now been passed to the devotee.

The aarti plate is generally made of metal, usually silver, bronze or copper. On it must repose a lamp made of kneaded flour, mud or metal, filled with oil or ghee. One or more cotton wicks (always an odd number) are put into the oil and then lighted, or camphor is burnt instead. The plate may also contain flowers, incense and akshata (rice).[7] In some temples, a plate is not used and the priest holds the ghee lamp in his hand when offering it to the Deities.

The purpose of performing aarti is the waving of lighted wicks before the deities in a spirit of humility and gratitude, wherein faithful followers become immersed in God's divine form. It symbolises the five elements:

Community Aarti is performed in the mandir; however, devotees also perform it in their homes.

Aarti can be an expression of many things including love, benevolence, gratitude, prayers, or desires depending on the object it is done to/ for. For example, it can be a form of respect when performed to elders, prayers when performed to deities, or hope when performed for homes or vehicles. Emotions and prayers are often silent while doing Aarti, but this is determined by the person carrying out the ritual or the holiday involved. It's also believed that goodwill and luck can be taken through symbolic hand movements over the flame.

When aarti is performed, the performer faces the deity of God (or divine element, e.g. Ganges river) and concentrates on the form of God by looking into the eyes of the deity (it is said that eyes are the windows to the soul) to get immersed. The flame of the aarti illuminates the various parts of the deity so that the performer and onlookers may better see and concentrate on the form. Aarti is waved in circular fashion, in clockwise manner around the deity. After every circle (or second or third circle), when Aarti has reached the bottom (6–8 o'clock position), the performer waves it backwards while remaining in the bottom (4–6 o'clock position) and then continues waving it in clockwise fashion. The idea here is that aarti represents our daily activities, which revolves around God, a center of our life. Looking at God while performing aarti reminds the performer (and the attendees of the aarti) to keep God at the center of all activities and reinforces the understanding that routine worldly activities are secondary in importance. This understanding would give the believers strength to withstand the unexpected grief and keeps them humble and remindful of God during happy moments. Apart from worldly activities aarti also represents one's self - thus, aarti signifies that one is peripheral to Godhead or divinity. This would keep one's ego down and help one remain humble in spite of high social and economic rank. A third commonly held understanding of the ritual is that aarti serves as a reminder to stay vigilant so that the forces of material pleasures and desires cannot overcome the individual. Just as the lighted wick provides light and chases away darkness, the vigilance of an individual can keep away the influence of the material world.[8]

Aarti is not only limited to God. Aarti can performed not only to all forms of life, but also inanimate objects which help in progress of the culture. This is exemplified by performer of the aarti waving aarti to all the devotees as the aarti comes to the end – signifying that everyone has a part of God within that the performer respects and bows down to. It is also a common practice to perform aarti to inanimate objects like vehicles, electronics etc. at least when a Hindu starts using it, just as a gesture of showing respect and praying that this object would help one excel in the work one would use it for. It is similar to the ritual of doing auspicious red mark(s) using kanku (kumkum) and rice.

Hinduism has a long tradition of aarti songs, simply referred to as 'Aarti', sung as an accompaniment to the ritual of aarti. It primarily eulogizes to the deity the ritual is being offered to, and several sects have their own version of the common aarti songs that are often sung on chorus at various temples, during evening and morning aartis. Sometimes they also contain snippets of information on the life of the gods.

The most commonly sung aarti is that which is dedicated to all deities is Om Jai Jagdish Hare, known as "The Universal Aarti" and is another common aarti song. Its variation are used for other deities as well such as Om Jai Shiv omkara, Om Jai Lakshmi mata, Om Jai Ambe gauri, Om Jai Adya Shakti, Om Jai Saraswati Mata, Om Jai Gange Mata, Om Jai Tulsi Mata and Om Jai Surya Bhagvaan. In Ganesha worship, the aarti Sukhakarta Dukhaharta is popular.

In Swaminarayan Mandirs, Jay Sadguru Swami is the aarti that is sung. In most temples in India, aarti is performed at least twice a day, after the ceremonial puja, which is the time when the largest number of devotees congregates. In Sikhism the aarti sung is Gagan mein thaal.

Aarti performed at southern Indian temples consists of offering a camphor lamp (or oil lamp) to the Deities and then distributing it to the devotees, who line up. They hover their hands over the flame and touch their hands to their eyes, this may be done once or three times. It is the last ritual performed in puja. Aarti is also referred to as Deepa Aaradhanai in Tamil, Deepaaradhanay in Kannada, Deepaaradhanamu or "Haarati" in Telugu, Deepaaradhana in Malayalam.

Group arati at the Dashashwamedh Ghat

In Gaudiya Vaishnavism, aarti refers to the whole puja ritual, of which offering the lamp is only one part. A shankha (conch) is blown to start the aarti, then an odd number of incense sticks are offered to the deity. The lamp is offered next, and then circulated among the devotees. A conch is then filled with water, and offered; the water is then poured into a sprinkler and sprinkled over the devotees. A cloth and flowers are then offered, and the flowers are circulated to the devotees, who sniff them. The deity is then fanned with a camara whisk, and a peacock fan in hot countries. 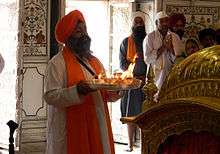 Aarti plate at a Sikh Gurdwara

Amritsari Sikhs resist performing Aarti as Hindus perform, but few Sikh Gurdwaras perform Aarti in similar manner. It includes two Takhats: Hazur Sahib and Patna Sahib. Few Nihangs also carry out Aarti in same manner. According to them, difference in their Aarti is that Sikhs do Aarti of divine wisdom, which is in form of Guru Granth Sahib. The concept is similar to bowing before Guru Granth Sahib on knees, the practice which is common in Hindus while bowing before Idols.However, this being said; when bowing before the Guru Granth Sahib, (In Sikh Philopsophy) You bow before the divine knowledge of the gurus, and not for its physical form. Aarti is done with a thali in Ravidassi Bhavans that still house the guru granth sahib