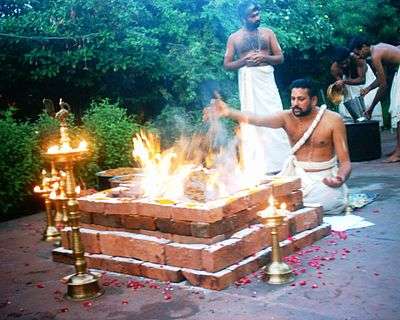 A homa being performed

Homa is a Sanskrit word that refers to a ritual, wherein an oblation or any religious offering is made into fire.[1][2] A Homa is sometimes called a "sacrifice ritual" because the fire destroys the offering, but a Homa is more accurately a "votive ritual".[1] The fire is the agent, and the offerings include those that are material and symbolic such as grains, clarified butter, milk, incense and seeds.[1][3]

It is rooted in the Vedic religion,[4] and was adopted in ancient times by Buddhism and Jainism.[1][3] The practice spread from India to Central Asia, East Asia and Southeast Asia.[1] Homa rituals remain an important part of many Hindu ceremonies, and variations of Homa continue to be practiced in current-day Buddhism, particularly in parts of Tibet and Japan.[4][5] It is also found in modern Jainism.[4][6]

A Homa ritual is known by alternate names, such as yajna in Hinduism which sometimes means larger public fire rituals, or jajnavidhana or goma in Buddhism.[3][7] In modern times, a Homa or Havana tends to refer to a private ritual around a symbolic fire, such as those observed at a wedding.[8]

Some sources treat the words homa/homam and havan (Sanskrit: हवन) as synonymous.[12]

Homa traditions are found all across Asia, from Samarqand to Japan, over a 3000-year history.[4] A homa, in all its Asian variations, is a ceremonial ritual that offers food to fire and is ultimately linked to the traditions contained in the Vedic religion.[4] The tradition reflects a reverence for fire and cooked food (Paka-yajna) that developed in Asia, and the Brahmana layers of the Vedas are the earliest records of this ritual reverence.[13]

Yajna or vedic fire sacrifice ritual, in Indian context, became a distinct feature of the early Sruti (Vedic) rituals.[4] A srauta ritual is a form of quid pro quo where through the fire ritual, a sacrificer offered something to the gods, and the sacrificer expected something in return.[16][17] The Vedic ritual consisted of sacrificial offerings of something edible or drinkable,[18] such as milk, clarified butter, yoghurt, rice, barley, an animal, or anything of value, offered to the gods with the assistance of fire priests.[19][20] This Vedic tradition split into Srauta (Sruti-based) and Smarta (Smriti-based).[4]

The Homa ritual practices were copied by different Buddhist and Jaina traditions, states Phyllis Granoff, with their texts appropriating the "ritual eclecticism" of Hindu traditions, albeit with variations that evolved through the medieval times.[4][6][21] The homa-style Vedic sacrifice ritual, states Musashi Tachikawa, was absorbed into Mahayana Buddhism and homa rituals continue to be performed in some Buddhist traditions in Tibet, China and Japan.[5][22] 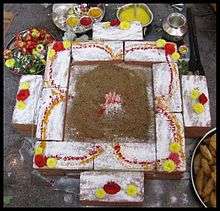 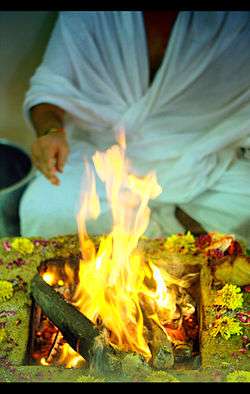 A homa altar with offerings (top), and a ceremony in progress

The Homa ritual grammar is common to many Sanskara (rite of passage) ceremonies in various Hindu traditions.[23][24][25] The Vedic fire ritual, at the core of various Homa ritual variations in Hinduism, is a "bilaterally symmetrical" structure of a rite.[26] It often combines fire and water, burnt offerings and soma, fire as masculine, earth and water as feminine, the fire vertical and reaching upwards, while the altar, offerings and liquids being horizontal.[26] The Homa ritual's altar (fire pit) is itself a symmetry, most often a square, a design principle that is also at the heart of temples and mandapas in Indian religions.[27] The sequence of homa ritual events similarly, from beginning to end, are structured around the principles of symmetry.[26] The forms and means of offerings, states Michael Witzel, are symbolism of the masculine and feminine, such as ghee (symbolism of masculine semen) offered into the fire from a ladle ritually shaped in form of a yoni (symbolism for feminine prakriti).[26]

The fire-altar (vedi or homa/havan kunda) is generally made of brick or stone or a copper vessel, and is almost always built specifically for the occasion, being dismantled immediately afterwards. This fire-altar is invariably built in square shape. While very large vedis are occasionally built for major public homas, the usual altar may be as small as 1 x 1 foot square and rarely exceeds 3 x 3 feet square.

A ritual space of homa, the altar is temporary and movable.[1] The first step in a homa ritual is the construction of the ritual enclosure (mandapa), and the last step is its deconstruction.[1] The altar and mandapa is consecrated by a priest, creating a sacred space for the ritual ceremony, with recitation of mantras. With hymns sung, the fire is started, offerings collected. The sacrificer enters, symbolically cleanses himself or herself, with water, joins the homa ritual, gods invited, prayers recited, conch shell blown. The sacrificers pour offerings and libations into the fire, with hymns sung, often to the sounds of svaha.[28] The oblations and offerings typically consist of clarified butter (ghee), milk, curd, sugar, saffron, grains, coconut, perfumed water, incense, seeds, petals and herbs.[29][30]

The altar and the ritual is a symbolic representation of the Hindu cosmology, a link between reality and the worlds of gods and living beings.[10] The ritual is also a symmetric exchange, a "quid pro quo", where humans offer something to the gods through the medium of fire, and in return expect that the gods will reciprocate with strength and that which they have power to influence.[10][17] 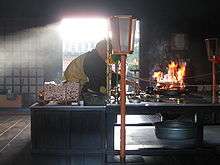 The Homa (護摩, goma) ritual of consecrated fire is found in some Buddhist traditions of Tibet, China and Japan.[5][22] Its roots are the Vedic ritual, it evokes Buddhist deities, and is performed by qualified Buddhist priests.[5][33] In Chinese translations of Buddhist texts such as Kutadanta Sutta, Dighanikaya and Suttanipata, dated to be from the 6th to 8th century, the Vedic homa practice is attributed to Buddha's endorsement along with the claim that Buddha was the original teacher of the Vedas in his previous lives.[33]

In some Buddhist homa traditions, such as in Japan, the central deity invoked in this ritual is usually Acalanatha (Fudō Myōō 不動明王, lit. immovable wisdom king). The word Acalanatha is another name for the Hindu god Rudra (Shiva) in the Vedic tradition, for Vajrapani or Chakdor in Tibetan traditions, and of Sotshirvani in Siberia.[34][35] The Acala Homa ritual procedure follows the same Vedic protocols found in Hinduism, with offerings into the fire by priests who recite mantras being the main part of the ritual and the devotees clap hands as different rounds of hymns have been recited.[36] Other versions of the Vedic homa (goma) rituals are found in Shingon Buddhism, Shinto and Zen Buddhism traditions in Japan.[37][38][39]

In most Shingon temples, this ritual is performed daily in the morning or the afternoon, and is a requirement for all acharyas to learn this ritual upon entering the priesthood.[40] The original medieval era texts of the goma rituals are in Siddham Sanskrit seed words and Chinese, with added Japanese katakana to assist the priests in proper pronunciation.[41] Larger scale ceremonies often include multiple priests, chanting, the beating of Taiko drums and blowing of conch shell (horagai) around the mandala with fire as the ceremonial focus.[31][32] Homa rituals (sbyin sreg) widely feature in Tibetan Buddhism and Bön and are linked to a variety of Mahayana Buddhas and tantric deities [42]

Homa rituals are also found in Jainism.[4][6] For example, the Ghantakarn ritual is a homa sacrifice, which has evolved over the centuries, and where ritual offerings are made into fire, with pancamrit (milk, curd, sugar, saffron and clarified butter) and other symbolic items such as coconut, incense, seeds and herbs.[43][44] The mantra recited by Jains include those in Sanskrit, and the 16th-century Svetambara text Ghantakarna Mantra Stotra is a Sanskrit text which describes the homa ritual dedicated to Ghantakarna Mahavira in one of the Jaina sects.[43][45]

The Adipurana of Jainism, in section 47.348, describes a Vedic fire ritual in the memory of Rishabha.[46] Traditional Jaina wedding ceremonies, like among the Hindus, is a Vedic fire sacrifice ritual.[44][47]