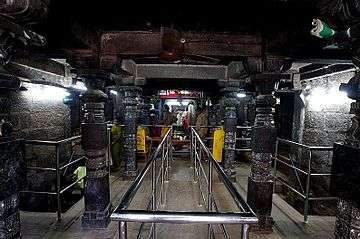 A darsana literally a means glimpse or view. In a Hindu temple, the term refers to viewing the inner sanctum under the main Shikhara or Gopuram of the temple, which hosts the murti (image of god). Above arrangement is for darsana at the Sri Chalukya Kumara Rama Bheemeshwara Swamy Temple in Andhra Pradesh.

Darśana (Sanskrit: दर्शन, lit. theophany) is the auspicious sight of a deity or a holy person.[1] The term also refers to six orthodox schools of Hindu philosophy, their literature on spirituality and soteriology.[2]

Darshana is described as an "auspicious sight" of a holy person, which bestows merit on the person who is seen.[1] "Sight" here means seeing or beholding, and/or being seen or beheld.

It is most commonly used for theophany, "manifestation / visions of the divine", in Hindu worship, e.g. of a deity (especially in image form), or a very holy person or artifact. One can receive darshana or a glimpse of the deity in the temple, or from a great saintly person, such as a great guru.[3]

The term darshana also refers to the six systems of thought, called darśanam, that comprise classical Hindu philosophy.[4][5] The term therein implies how each of these six systems distinctively look at things and the scriptures in Indian philosophies.[5][6] The six orthodox Hindu darshana are Nyaya, Vaisheshika, Samkhya, Yoga, Mimamsa, and Vedanta. Buddhism and Jainism are examples of non-Hindu darshans.[6]

On the significance of darśana in Mahayana thought, Paul Harrison writes: "By the second century CE... the vision of the Buddha (buddha-darśana) and the accompanying hearing of the Dharma (dharma-śravaṇa) are represented as a transformation experience of decisive importance for practitioners, be they who have renounced (mundane life) "ascetics" or householders."[7]

The Abhidharma, collections of systematic summaries of the sutras, mention Darśana-citta, i.e. visions.[8]

Indian Mahayana philosophers Vasubandhu and Asanga acknowledged five paths to liberation, of which the third is darśana-marga, the "path of seeing".[9]

Nagarjuna, a prominent philosopher of the Madhyamaka school of Mahayana Buddhism, wrote that the wise person perceives tattva-darśana, true reality.[10][11]

Darshana also sometimes has a more mundane meaning. For example, Sivananda Saraswati wrote in his book The Practice of Brahmacharya that one of the eight aspects of brahmacharya (celibacy) is not to look lustfully at women: "You should carefully avoid... Darshana or looking at women with passionate resolve".[12]

Scholar of religion Richard H. Davis has said that darśana (viewpoint, philosophical school) is one of three terms in classical Indian discourse that could be considered roughly analogous to what today's English-speakers understand as "religion." The other two terms are dharma (duty, morality, a code of proper conduct) and marga (route, spiritual path). According to Davis, "most Hindu texts accepted that religious paths (marga) are relative to the points of view (darśana) and moral responsibilities (dharma) of practitioners, whose individual circumstances may make one or another course of action more appropriate in their particular situations."[13]

Poet Gary Snyder has given a naturalistic meaning to darshana:

It's a gift; it's like there's a moment in which the thing is ready to let you see it. In India, this is called darshan. Darshan means getting a view, and if the clouds blow away, as they did once for me, and you get a view of the Himalayas from the foothills, an Indian person would say, 'Ah, the Himalayas are giving you their darshana'; they're letting you have their view. This comfortable, really deep way of getting a sense of something takes time. It doesn't show itself to you right away. It isn't even necessary to know the names of things the way a botanist would. It's more important to be aware of the 'suchness' of the thing; it's a reality. It's also a source of a certain kind of inspiration for creativity. I see it in the work of Georgia O'Keeffe..."[14]

In Sikh culture, folios or manuscripts that depict all ten Gurus on a single page are called darshana paintings, simply because they offer a vision of all ten sacred Gurus in one glance.