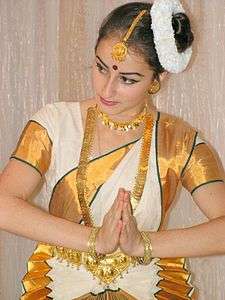 Namaste (/ˈnɑːməsteɪ/, NAH-məs-tay; Hindi/Nepali: नमस्ते Marathi: नमस्कार Hindi: [nəməsteː]), NAH-məs-tay), sometimes spoken as Namaskar or Namaskaram, is a respectful form of greeting in Hindu custom, found on the Indian subcontinent mainly in India and Nepal and among the Indian diaspora. It is used both for salutation and valediction.[1][2] Namaste is usually spoken with a slight bow and hands pressed together, palms touching and fingers pointing upwards, thumbs close to the chest. This gesture is called Añjali Mudrā or Pranamasana.[3] In Hinduism it means "I bow to the divine in you".[4][5] The greeting may also be spoken without the gesture or the gesture performed wordlessly, carrying the same meaning. 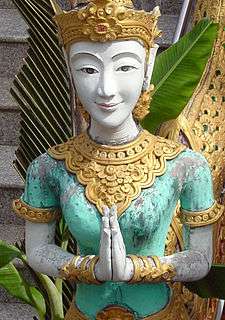 Namaste (Namas + te, Devanagari: नमस् + ते = नमस्ते) is derived from Sanskrit and is a combination of the word nama and the second person dative pronoun in its enclitic form, te.[6] The word namaḥ takes the Sandhi form namas before the sound t.[7][8]

A less common variant is used in the case of three or more people being addressed namely Namo vaḥ which is a combination of namaḥ and the enclitic 2nd person plural pronoun vaḥ.[6] The word namaḥ takes the Sandhi form namo before the sound v.[7]

An even less common variant is used in the case of two people being addressed, namely, Namo vām, which is a combination of namaḥ and the enclitic 2nd person dual pronoun vām.[6]

Excavations for Indus civilization have revealed many male and female terracotta figures in Namaste posture.[11][12] These archeological findings are dated to be between 3000 BC to 2000 BC.[13][14] 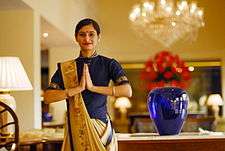 Pressing hands together with a smile to greet Namaste – a common cultural practice in India.

The gesture is widely used throughout India, Nepal, Bangladesh, parts of Asia and beyond where people of South and Southeast Asian origins have migrated.[4] Namaste or namaskar is used as a respectful form of greeting, acknowledging and welcoming a relative, guest or stranger. It is used with good byes as well.[2] In some contexts, namaste is used by one person to express gratitude for assistance offered or given, and to thank the other person for his or her generous kindness.[15]

Namaskar is also part of the 16 upacharas used inside temples or any place of formal Puja (worship). Namaste in the context of deity worship, conclude scholars,[16][17] has the same function as in greeting a guest or anyone else. It expresses politeness, courtesy, honor, and hospitality from one person to the other. This is sometimes expressed, in ancient Hindu scriptures such as Taittiriya Upanishad, as Atithi Devo Bhav (literally, the guest is god).[18][19]

Namaste is one of the six forms of pranama, and in parts of India these terms are used synonymously.[20][21]

In the Hindi and Nepalese speaking populations of South Asia, both Namaste (/ˈnɑːməsteɪ/, ; Devanagari: नमस्ते) and Namaskar are synonymously used. In Nepal, people generally use Namaskar for greeting and respecting their elders. In Odia namaste is also known as ନମସ୍କାର (namaskār) General greeting[Hello-Namaskar]. In Kannada, Namaskara (ನಮಸ್ಕಾರ) for singular and Namaskaragalu (ನಮಸ್ಕಾರಗಳು) is used. In Telugu, Namaste is also known as Dandamu (దండము) or namaskaram (నమస్కారం) for singular and Dandaalu or namaskaralu for plural form.pranamamu (ప్రణామము) is also used in formal Telugu . In Bengali, the Namaste gesture is expressed as Nōmōshkar (নমস্কার), and said as Prōnäm (Bengali: প্রণাম) informally. In Assamese, Nômôskar (নমস্কাৰ) is used. In Tamil, Namaste is known as Vanakkam (வணக்கம்) which is derived from the root word vanangu (வணங்கு) meaning to bow or to greet.

In the United States and the United Kingdom, in recent years, the namaste greeting is used as a spiritual greeting, often during Yoga classes.[22]