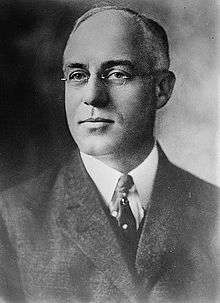 Lowman shortly before his appointment as Assistant Treasury Secretary, May 1927.

Seymor Lowman was born in Chemung, New York on October 7, 1868, the son of John Lowman (1832–1884) and Fanny (Bixby) Lowman. He was raised in Bainbridge, and completed his high school education at Bainbridge Union School. He then graduated from Lowell's Business College in Binghamton, and became a school teacher. He studied law with attorney John W. Church of Norwich, was admitted to the bar in 1891, and practiced in Elmira. On September 9, 1893, he married Katherine Harding Smith, whom he had known while growing up in Bainbridge.

He was Lieutenant Governor of New York from 1925 to 1926, elected at the New York state election, 1924 on the Republican ticket. At the same time, Democratic Governor Al Smith was re-elected, while his running mate George R. Lunn was defeated. Lowman was the last lieutenant governor of New York who was not the running mate of the elected governor. At the New York state election, 1926, he was defeated for re-election when Al Smith was re-elected with his running mate Edwin Corning.

From August 1, 1927 until the end of the Hoover administration in 1933, Seymor Lowman was Assistant U.S. Secretary of the Treasury under Andrew W. Mellon and Ogden L. Mills, and as a well-known "dry" (against the sale and consumption of alcoholic beverages) was in charge of the enforcement of Prohibition. A month after taking office, he stated: "There are many incompetent and crooked men in the service. Bribery is rampant. There are many wolves in sheep's clothing. We are after them... Some days my arm gets tired signing orders of dismissal." [1]

After leaving office Lowman served as president of the Elmira Savings Bank.

Lowman died in Elmira on March 13, 1940. He was buried at Riverside Cemetery in Chemung.[2]