Jeremiah Van Rensselaer (August 27, 1738 – February 19, 1810), from the prominent Van Rensselaer family, was the 3rd Lieutenant Governor of New York and a member of Congress in the U.S. House of Representatives, representing New York in the 1st United States Congress. 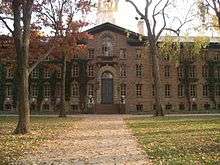 Nassau Hall, at Princeton University (then, the College of New Jersey)

Van Rensselaer was tutored at the manor house, attended private school in Albany, New York, and attended college at the College of New Jersey (now Princeton University) where he graduated in 1758.[7]

Jeremiah was descended from and married into "the best provincial families"[1] in New York including the Livingstons, Schuylers, Van Cortlandts, Van Schaicks, and Bayards.[8]

His paternal grandfather was Hendrick van Rensselaer (1667–1740), director of the Eastern patent of the Rensselaerswyck manor, and his paternal grandmother was Catharina Van Brugh, daughter of merchant Johannes Pieterse Van Brugh (1624–1697).[9] He had many noteworthy cousins, including Killian K. Van Rensselaer (1763–1845), who was also a U.S. Representative that served in Congress from 1803 until 1811.[10]

Van Rensselaer became a land agent, merchant, and surveyor. In 1766, he was a signer of the constitution of the Albany Sons of Liberty and became a member of the Albany Committee of Safety. During the American Revolutionary War he was commissioned as an ensign in the third regiment of the New York Line where he served as a paymaster.[1]

He was elected to the First United States Congress and served from March 4, 1789 to March 3, 1791,[7] but lost his bid for reelection to the Second Congress to James Gordon.[7]

Van Rensselaer was Lieutenant Governor of New York from 1801 to 1804, serving under Governor George Clinton. He was curator of the Evangelical Lutheran Seminary at Albany in 1804.[1]

He died on February 19, 1810 in Albany and was buried in the Dutch Reformed cemetery there. His body was later moved to the Albany Rural Cemetery in Menands, New York.[7]