He studied law at Albany, where he became friendly with his fellow student Martin Van Buren. He was admitted to the bar in 1806, and began to practice law in Auburn, New York. He joined the Democratic-Republican Party, and was appointed postmaster of the village, and in 1811 county clerk of Cayuga County. In 1814, he married Evelina Vredenburgh, who died in 1834. None of their children survived infancy. The same year he was elected to the 14th United States Congress as a supporter of the war measures of the administration. He took part in the debates upon the measures to which the close of the war and the prostration of public and private credit gave rise. He also supported and voted for the act changing the compensation of congressmen from six dollars a day to $1,800 per annum, a course which temporarily clouded his political fortunes. Popular dissatisfaction with his actions was such that he was defeated at the congressional elections of April 1816, and resigned his seat on June 4, 1816. In April 1823, he was appointed Judge of the Seventh Circuit and remained on the bench until 1828 when he resigned. 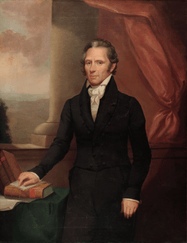 In 1828, he joined his friend Martin Van Buren's ticket for the gubernatorial election as the Democratic-Republican candidate for Lieutenant Governor, a step that rendered it necessary for him to resign his judicial office. It was expected that Andrew Jackson would be elected President at the same election, in which event Van Buren would be made Secretary of State and would, if his appointment were confirmed, have to resign the office of Governor and the leadership of the party, and with Throop as his lieutenant would keep both offices in the hands of a friend. These expectations were fulfilled, and Throop succeeded to the office of Governor on 12 March 1829. He was re-elected governor in 1830, defeating again Francis Granger who had been the contender for the lieutenant-governorship at the previous election. At this time the construction of the Chenango Canal became one of the chief questions of state policy. He opposed the plan, raising such a vehement opposition to him in the localities through which the proposed canal would pass, that in 1832 he declined to seek a third term. 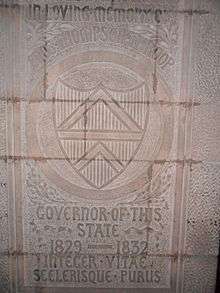 The Enos T. Throop memorial at the Cathedral of All Saints (Albany, New York).

In 1833 he was appointed by President Jackson naval officer at the Port of New York, which office he held until President Van Buren appointed him on 6 February 1838 Chargé d'Affaires of the United States to the Kingdom of the Two Sicilies. On this post he remained until 12 January 1842. After spending two years in Paris, he returned to the United States, and resided upon an estate on the banks of Owasco Lake near Auburn. In 1847 he moved to Kalamazoo, Michigan, where he purchased a farm of 800 acres (3.2 km2), and became noted among agriculturists. Advancing years compelled him to give up farming, and in 1857 he returned to his former home, removing in 1868 to New York City, but a few years later again returning to his residence near Auburn.

He died on his estate of Willowbrook, near Auburn, on 1 November 1874, aged 90. He was buried in the churchyard of St. Peter's Episcopal Church (now Sts. Peter and St. John Church) in Auburn.

There is a memorial to him at the Cathedral of All Saints (Albany, New York) (see image on this page) that states in Latin, integer vitae scelerisque purus, which means "upright of life and free from wickedness."[1]

The Town of Throop, New York in Cayuga County is named after him.