He was the son of Philip Dorsheimer. He was educated in common schools, then at Phillips Andover Academy, and then studied at Harvard College from 1849 to 1851. He left Harvard without graduating because of a protracted illness. After leaving Harvard, he settled in Buffalo, New York, studied law, and was admitted to the bar in 1854.

In 1859, he formed a partnership with Solomon G. Haven. Also in 1859, Harvard awarded Dorsheimer the honorary degree of Master of Arts. In politics, he began as a Democrat, joined the Republican Party in 1856, and in 1860 again supported the Republican ticket. In 1861, he joined the Union Army as an aide-de-camp with the rank of major and served on the staff of General John C. Frémont, but at the close of the Missouri campaign Dorsheimer returned to civil life, and published a series of articles in the Atlantic Monthly entitled “Frémont's Hundred Days in Missouri.”

From 1867 to 1871, as a Republican, he was United States Attorney for the Northern District of New York.

He was a delegate to the 1872 Liberal-Republican National Convention at Cincinnati, Ohio, and afterwards became a Democrat. He was the Lieutenant Governor of New York from 1875 to 1879. During this time, he helped implement the measures against the Canal Ring, and was a delegate to the 1876 Democratic National Convention. Afterwards he resumed the practice of law in partnership with David Dudley Field in New York City.

He was elected as a Democrat to the 48th United States Congress and served from March 4, 1883, to March 3, 1885. In 1884, he published a biography of Grover Cleveland, the Democratic candidate for the presidency, and in July 1885, was appointed U.S. Attorney for the Southern District of New York which office he resigned in March 1886.

In 1885, he purchased the New York Star and began its publication as a daily paper on September 15. He was one of the founders of the Buffalo Fine Arts Academy and the Buffalo Historical Society.

Dorsheimer died in Savannah, Georgia, while on a train trip to Florida with his wife. His only daughter had died in 1874. Dorsheimer is buried at the Forest Lawn Cemetery, Buffalo. 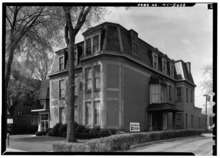 Today, Dorsheimer is best remembered for hiring American architect H.H. Richardson to design a house for him on Delaware Avenue in Buffalo, which still stands, and for helping Richardson win the commission to design the New York State Asylum in Buffalo. He is also chiefly responsible for bringing landscape architect Frederick Law Olmsted to Buffalo to design its park system.[1] The William Dorsheimer House was listed on the National Register of Historic Places in 1980.[2]