In 2010 he won his first stage race, the Thüringen Rundfahrt, and finished second in the under 23 race at the Road World Championship. His biggest wins to date are the 2015 Milan–San Remo and the 2015 Paris-Roubaix, two of cycling's five monuments. He has also won the 2014 Gent–Wevelgem, ten stages and the points classification at the Vuelta a España, one stage of the Giro d'Italia, two stages of the 2011 Critérium du Dauphiné,[3] the 2013 Vattenfall Cyclassics and the overall winner of the 2012 UCI Europe Tour.[4][5]

In 2011, Degenkolb turned professional with the UCI World Tour HTC-Highroad squad, following in the footsteps of other notable sprinters such as Mark Cavendish and André Greipel. In his debut season in pro ranks he won stages at the Volta ao Algarve, Three Days of West Flanders and Bayern-Rundfahrt before winning two stages of the Critérium du Dauphiné. He also won the Eschborn-Frankfurt City Loop one day race. 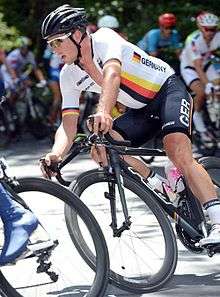 Degenkolb at the 2012 Olympic road race

Following the disbanding of the HTC team at the end of 2011, Degenkolb moved to UCI Professional Continental Tour Project 1t4i squad.

Degenkolb won the overall classification of the 2012 Tour de Picardie, where he prevailed in the first and third stages of the 3-stage race. The time bonuses helped him secure the overall win.[6]

On 19 August 2012, Degenkolb took his first stage win on a Grand Tour, stage 2 of the Vuelta a España concluding in Viana. On the slightly rising finish, he crossed the line before Allan Davis of Orica–GreenEDGE and Team Sky's Ben Swift.[7] He repeated the exploit on stage 5, a flat affair in Logroño. Degenkolb came around Daniele Bennati, who had opened a decent gap in the last 200 m (660 ft), and crossed the line with a slight margin over the RadioShack–Nissan rider.[8]

With the points classification jersey on his shoulders, he took his third win of the Vuelta on stage 7, which came to an end with a lap around the Alcañiz race circuit.[9] After what he qualified as a pretty mellow race on stage 10, Degenkolb came out as the victor again in Sanxenxo, sprinting hard on the uphill false-flat, edging Frenchman Nacer Bouhanni of FDJ–BigMat.[10] He finished the Vuelta with five victories, including the coveted last stage in Madrid, where he concluded his second participation in a Grand Tour with another win.[11]

Degenkolb followed these successes by another sprint victory at the Grand Prix d'Isbergues[12] and a fourth place on the hilly UCI Road World Championships taking place in Valkenburg behind winner Philippe Gilbert (BMC Racing Team).[13]

Degenkolb's credentials in 2013 started in May with a stage victory at the Giro d'Italia, his first win in the Italian Grand Tour.[14] For the Tour de France, Degenkolb acted as a lead-out man for his teammate Marcel Kittel, who won four stages. Degenkolb then went on to win the 2013 World Tour race Vattenfall Cyclassics in his homeland, beating Andre Greipel to the line in the final.[15] In October, Degenkolb won two races on French soil in less than a week, Paris–Bourges and then the 1.HC Paris–Tours.[16]

In 2014, Degenkolb most notably won the Belgian classic Gent-Wevelgem ahead of his fellow sprinters Arnaud Demare and Peter Sagan.[17] During the Paris–Nice stage race, he won stage 3 from a bunch sprint, temporarily taking over the race lead,[18] and went on to win the overall points classification.[19] He also earned the points classification and 3 stages of the Tour Méditerranéen and 4 stages of the Vuelta a España. The first stage he won contained two categorised climbs and was raced in oven-like heat.[20] The second one was a massive sprint where FDJ rider Nacer Bouhanni complained he had been unfairly pushed to the barriers by Degenkolb, who still retained the victory.[21] The third success was a 'crazy finish' according to Degenkolb, who had the better of second placed Tom Boonen.[22] The fourth victory came on Stage 17 and saw him edge Michael Matthews for the line.[23] Right after the Vuelta and conquering the points classification jersey, Degenkolb had to be hospitalized for a lymphatic infection.[24]

Degenkolb (centre) on the podium after winning the 2015 Paris-Roubaix

In 2015, Degenkolb won his first race at the Dubai Tour, the third stage of the race, beating Alejandro Valverde up a 17 percent gradient final climb.[25] He also moved into the lead of the general classification, but lost it the following and final day to Mark Cavendish, finishing the race in second overall.[26] He grabbed the biggest victory of his career at that point in March at Milan–San Remo, where he won the sprint in front of 2014 winner Alexander Kristoff.[27] In April, he finished seventh at the Tour of Flanders,[28] before winning the much coveted classic Paris-Roubaix just a few days later. In the final kilometers, he bridged the gap to two escapees and eventually won a group sprint of seven riders in the Roubaix Velodrome.[29] He became the first German to win the race since Josef Fischer won the inaugural edition in 1896, and the first rider to win Milan-San Remo and Paris-Roubaix in the same year since Sean Kelly in 1986.[30] In May, Degenkolb took two stage victories at the Bayern-Rundfahrt, winning the points classification.[31]

During the 2015 Tour de France, Degenkolb replaced an unfit Kittel as Giant-Alpecin's main sprinter and team captain.[32] He would go on to describe his Tour as "satisfactory, yet not exactly what I had dreamed about",[33] after placing in the top ten at eight different stages without winning one of them.[34] This included a second-place finish at stage 4, which featured cobbled sections suiting the Paris-Roubaix winner. Degenkolb was seen at the front of the pack following attacks by Vincenzo Nibali over the pavé sections, but was ultimately beaten by a late attack of compatriot Tony Martin.[35]

At the 2015 Vuelta a España, Degenkolb was elected as his team's captain.[36] During the first two weeks of the race, stage wins eluded him, finishing high at several stages, including top three positions in stages 3, 5 and 10.[37] When his teammate Tom Domoulin unexpectedly challenged for the overall win, Degenkolb worked for the Dutchman, including an "astounding"[38] performance during stage 19. On the mountainous terrain, he was able to stay with the top twenty riders of the pack until the end, setting up Domoulin for an attack at the cobbled ascent to the finish line in Ávila.[39] Degenkolb received praise for his performance, with directeur sportif Christian Guiberteau calling it "phenomenal".[38] Degenkolb was able to win the last stage to Madrid, beating riders like Danny van Poppel in a bunch sprint.[40]

Late in the season, Degenkolb targeted the Road World Championships in Richmond, Virginia,[41][42] being named in a leading duo with fellow sprinter André Greipel.[43] He was considered by many to be able to challenge for the title.[44][45][46][47] In the race itself, Degenkolb was placed at the front of the field for the better part of the latter laps of the race. On the cobbled climb up Libby Hill on the last lap, Degenkolb was the first to follow an attack by Zdeněk Štybar, but he was unable to follow the subsequent pace set by a group containing Niki Terpstra and Greg Van Avermaet, among others. He eventually finished 29th, 15 seconds down on winner Peter Sagan.[48] Degenkolb said after the race: "Of course, I am very disappointed. When Peter Sagan attacked at the penultimate climb, I had nothing left to react."[49] Degenkolb rounded up his 2015 season with a victory at the Saitama Criterium in Japan, beating local Fumiyuki Beppu (Trek–Segafredo) and Tour de France winner Chris Froome (Team Sky) in a sprint finish. Following the race, Degenkolb said: "It was a very great race, with so many spectators. They are super emotional, especially in the final the crowds were so loud and you can almost compare it to the Champs Elysees from the atmosphere and the noise on the said of the road […]. Now the season is really finished for me and now the preparation for the new season starts."[50]

On 23 January 2016, he was one of six Team Giant–Alpecin riders who were hit by a car which drove into on-coming traffic while training in Calpe, Spain. All riders were in stable condition.[51] Degenkolb himself suffered cuts to the thigh, forearm and his lips, as well as coming close to losing his left index finger.[52] He was treated in Valencia and Hamburg, but missed the spring classics season.[53] He returned to competition at Rund um den Finanzplatz in Frankfurt on 1 May 2016.[54] Even though he did not finish the race, he said that he was "satisfied" with his performance and called the race an important first step in his recovery.[55] He then attended the Tour of California, where he secured two top-ten stage finishes, declaring that he was happy with his progress, even though his injured finger was still a nuisance during sprints.[56] He showed further improvement at the Critérium du Dauphiné, his first World Tour event of the year, finishing eighth on stage 4.[57] Degenkolb started in the Tour de France in July, aiming particularty at the 16th stage ending in Bern.[58] Eventually he came fourth in the mass sprints both on stage 14 and 16, his best results of the season up to that point.[59][60]

On 8 July, 2016, Degenkolb announced he would leave Team Giant–Alpecin and join a new team for 2017 - with an announcement expected during the first rest day of the 2016 Tour de France.[61] In August, his new team was confirmed to be Trek–Segafredo.[62] He took his first win of the 2016 season on 14 August in the final stage of the Arctic Race of Norway, also securing victory in the race's points classification.[63] He followed this up with a second place at the EuroEyes Cyclassics in Hamburg, coming in behind Caleb Ewan in the bunch sprint.[64]

At the Road World Championships in Doha, Qatar, Degenkolb was part of the German team for the road race. Having initially succeeded in staying in the front group after an attack by the Belgian squad split the field early on in the race, a flat tyre forced Degenkolb to fall back into a second group. Here, Degenkolb tried to lead his team captain André Greipel back to the front, an effort disrupted by Belgian riders left his group, leading to Degenkolb at one point spraying water from his bidon on Jens Debusschere's face in frustration.[65][66] Speaking about the incident after the race, Degenkolb declared: "Oh, Jens asked for refreshment and I granted his wish."[67] After retiring from the race due to exhaustion with 40 km (25 mi) to go,[65] Degenkolb summarised his season: "That was a shit season this year. But I am still alive, life goes on."[67] He then ended his season at the Abu Dhabi Tour, where he came second to Giacomo Nizzolo on stage one.[68]