For the second President of Ramakrishna Math, see Shivananda.

Sivananda Saraswati (or Swami Sivanada) (8 September 1887 – 14 July 1963) was a Hindu spiritual teacher and a proponent of Yoga and Vedanta. Sivananda was born Kuppuswami in Pattamadai, in the Tirunelveli district of Tamil Nadu. He studied medicine and served in British Malaya as a physician for several years before taking up monasticism. He lived most of his life near Muni Ki Reti, Rishikesh.

He was the founder of the Divine Life Society (DLS) in 1936, Yoga-Vedanta Forest Academy (1948) and author of over 200 books on yoga, Vedanta, and a variety of subjects. He established Sivananda Ashram, the headquarters of the DLS, on the bank of the Ganges at Sivanandanagar, 3 kilometres (1.9 mi) from Rishikesh.[1][2][3]

Sivananda Yoga, the yoga form propagated by his disciple Vishnudevananda, is now spread in many parts of the world through Sivananda Yoga Vedanta Centres. These centres are not affiliated with Sivananda's ashrams, which are run by the Divine Life Society.

Sivananda was born Kuppuswamy in Pattamadai near Tirunelveli in Tamil Nadu, India, as the third son to his parents on 8 September 1887. As a child he was very active and promising in academics and gymnastics. He attended medical school in Tanjore, where he excelled. He ran a medical journal called Ambrosia during this period. Upon graduation he practised medicine and worked as a doctor in Malaya for ten years, with a reputation for providing free treatment to poor patients. Over time, a sense that medicine was healing on a superficial level grew in him, urging him to look elsewhere to fill the void, and in 1923 he left Malaya and returned to India to pursue a spiritual quest.

Upon his return to India in 1924, he visited Varanasi, Nashik, and then Rishikesh, where he met his guru, Vishwānanda Saraswati. It was Vishwānanda who initiated him into the Sannyasa order, and gave him his monastic name. However, since Sivānanda spent only a few hours with Vishwānanda, the full Viraja Homa ceremonies were performed later by Vishnudevānanda, the Mandaleswara of Sri Kailas Ashram. After initiation, Sivananda settled in Rishikesh, and immersed himself in intense spiritual practices. Sivānanda performed austerities for many years but he also continued to nurse the sick. With some money from his insurance policy that had matured, he started a charitable dispensary at Lakshman Jhula in 1927, serving pilgrims, holy men and the poor using his medical expertise.

After a few years, Sivananda went on an extensive pilgrimage and travelled the length and breadth of India to meditate at holy shrines and came in contact with spiritual teachers throughout India. During this Parivrajaka (wandering monk) life, Sivānanda visited important places of pilgrimage in the south, including Rameshvaram. He conducted Sankirtan and delivered lectures during his travels. He visited the Sri Aurobindo Ashram, and met Maharishi Shuddhananda Bharati to which he gave the title of Maharishi. At the Ramana Ashram, he had the darshan of Ramana Maharshi on Maharshi's birthday. He sang bhajans and danced in ecstasy with Maharshi's bhaktas. He also went on pilgrimages to various places in northern India including Kedarnath and Badrinath. He visited Kailash-Manasarovar in 1931.

During Sivananda's stay in Rishikesh and his travels around India, many came to him for guidance in the spiritual path. He permitted some of them to live near him and instructed them. Sivananda asked his students take copies of his short articles and send them for publication. Over time, large numbers of people started coming to him and his devotees started growing in numbers.

Sivananda founded the DLS in 1936 on the banks of the Ganges River. The free distribution of spiritual literature drew a steady flow of disciples to him, such as Satyananda Saraswati, founder of Satyananda Yoga.

Swami Sivananda entered Mahasamadhi (departure of a Self-realized saint from his mortal coil) on 14 July 1963 in his Kutir on the bank of the Ganges, in Sivanandanagar. 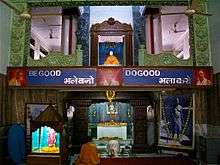 Disciples who went on to grow new organisations