In geometry, chamfering or edge-truncation is a Conway polyhedron notation operation that modifies one polyhedron into another. It is similar to expansion, moving faces apart and outward, but also maintain the original vertices. For polyhedra, this operation adds a new hexagonal face in place of each original edge.

Like the expansion operation, chamfer can be applied to any dimension. For polygons, it triples the number of vertices. For polychora, new cells are created around the original edges, The cells are prisms, containing two copies of the original face, with pyramids augmented onto the prism sides.

It is the Goldberg polyhedron GIII(2,0), containing triangular and hexagonal faces.

It can look a little like a truncated tetrahedron,

, which has 4 hexagonal and 4 triangular faces, which is the related Goldberg polyhedron: GIII(1,1). 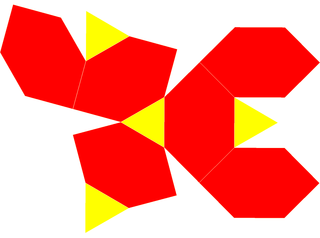 The 6 vertices are truncated such that all edges are equal length. The original 12 rhombic faces become flattened hexagons, and the truncated vertices become squares.

The hexagonal faces are equilateral but not regular. They are formed by a truncated rhombus, have 2 internal angles of about 109.47 degrees (

) and 4 internal angles of about 125.26 degrees, while a regular hexagon would have all 120 degree angles.

Because all its faces have an even number of sides with 180 degree rotation symmetry, it is a zonohedron. It is also the Goldberg polyhedron GIV(2,0), containing square and hexagonal faces.

and its six vertices are at the permutations of

This polyhedron looks similar to the uniform truncated octahedron:

We can construct a truncated octahedron model by twenty four chamfered cube blocks.[1] [2] 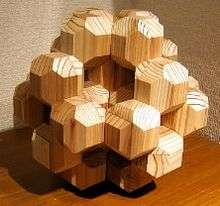 In geometry, the chamfered octahedron is a convex polyhedron constructed from the rhombic dodecahedron by truncating the 8 (order 3) vertices.

The 8 vertices are truncated such that all edges are equal length. The original 12 rhombic faces become flattened hexagons, and the truncated vertices become triangles.

The hexagonal faces are equilateral but not regular. 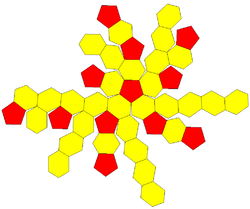 A net for chamfered dodecahedron

These 12 order-5 vertices can be truncated such that all edges are equal length. The original 30 rhombic faces become non-regular hexagons, and the truncated vertices become regular pentagons.

It is the Goldberg polyhedron GV(2,0), containing pentagonal and hexagonal faces.

This polyhedron looks very similar to the uniform truncated icosahedron which has 12 pentagons, but only 20 hexagons.

It also represents the exterior envelope of a cell-centered orthogonal projection of the 120-cell, one of six (convex regular 4-polytopes).

This is the shape of the fullerene C80; sometimes this shape is denoted C80(Ih) to describe its icosahedral symmetry and distinguish it from other less-symmetric 80-vertex fullerenes. It is one of only four fullerenes found by Deza, Deza & Grishukhin (1998) to have a skeleton that can be isometrically embeddable into an L1 space.

In geometry, the chamfered icosahedron is a convex polyhedron constructed from the rhombic triacontahedron by truncating the 20 order-3 vertices. The hexagonal faces can be made equilateral but not regular.