The Supreme Court Building is the seat of the Supreme Court of the United States and the Judicial Branch thereof. Completed in 1935, it is situated in Washington, D.C. at 1 First Street, NE, on the block immediately east of the United States Capitol. The building is under the jurisdiction of the Architect of the Capitol. On May 4, 1987, the Supreme Court Building was designated a National Historic Landmark.[1][2] It is one of a handful of National Historic Landmarks which are not listed on the National Register of Historic Places.[3]

Prior to the establishment of the Federal City, the United States government resided briefly in New York City. As such, the Supreme Court met there during this time in the Merchants Exchange Building. When the capital moved to Philadelphia, Pennsylvania, the Court moved with it and began meeting in Independence Hall, before settling in Old City Hall at 5th and Chestnut Streets from 1791 until 1800.[4] 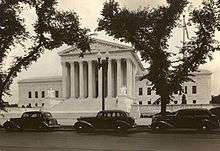 View of the Supreme Court Building in 1935 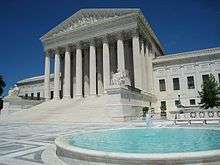 After the federal government moved to Washington, D.C., the court had no permanent meeting location until 1810. When the architect Benjamin Henry Latrobe built the second U.S. Senate chamber directly on top of the first US Senate chamber, the Supreme Court took up residence in what is now referred to as the Old Supreme Court Chamber from 1810 through 1860.[5] It remained in the Capitol until 1935, with the exception of a period from 1812 to 1819, during which the Court was absent from Washington because of the British invasion and the destruction of the Capitol during the War of 1812.[4]

In 1929, Chief Justice William Howard Taft argued successfully for the Court to have its own headquarters to distance itself from Congress as an independent branch of government, but he did not live to see it built. The court was finally designed by Cass Gilbert, who created many other structures in the United States.[6]

The Supreme Court Building is located at 1 First Street, NE (former site of the Old Brick Capitol, across the street from the United States Capitol) and was designed by architect Cass Gilbert (as Gilbert's last major project; he died before it was completed). It rises four stories (92 ft (28 m)) above ground. The cornerstone was laid on October 13, 1932, and construction completed in 1935, having cost $94,000 under the $9.74 million budget authorized by Congress. "The building was designed on a scale in keeping with the importance and dignity of the Court and the Judiciary as a coequal, independent branch of the United States Government, and as a symbol of 'the national ideal of justice in the highest sphere of activity.'"[4]

The Supreme Court Building is built in the Neoclassical style. The public façade is made of marble quarried from Vermont, and that of the non-public-facing courtyards, Georgia marble. Most of the interior spaces are lined with Alabama marble, except for the Courtroom itself, which is lined with Spanish ivory vein marble.[7] For the Courtroom's 24 columns, "Gilbert felt that only the ivory buff and golden marble from the Montarrenti quarries near Siena, Italy" would suffice. To this end, in May 1933, he petitioned the Italian Premier, Benito Mussolini, "to ask his assistance in guaranteeing that the Siena quarries sent nothing inferior to the official sample marble."

Not all the justices were thrilled by the new arrangements, the courtroom in particular. Harlan Fiske Stone complained it was "almost bombastically pretentious...Wholly inappropriate for a quiet group of old boys such as the Supreme Court." Another justice observed that he felt the court would be "nine black beetles in the Temple of Karnak," while still another complained that such pomp and ceremony suggested the justices ought to enter the courtroom riding on elephants. The New Yorker columnist Howard Brubaker noted at the time of its opening that it had "fine big windows to throw the New Deal out of."[8]

The west façade of the building (essentially, the "front" of the court, being the side which faces the Capitol) bears the motto "Equal Justice Under Law," while the east façade bears the motto "Justice, the Guardian of Liberty." On November 28, 2005, a basketball-sized chunk of marble weighing approximately 172 lb (78 kg) fell four stories from the west façade onto the steps of the Court; it had previously been part of the parapet above the word "under" in the "equal justice under law" engraving immediately above the figure of a Roman centurion carrying fasces. After the incident, planning was initiated to repair the west façade which includes cleaning, removal of debris and restoration. In 2012 scaffolding encased the west façade printed with a full-size photograph of the façade. The project was completed in 2013.[9]

The Supreme Court Building's facilities include:

Cass Gilbert's design for the building and its environs included an ambitious Beaux-Arts-styled sculptural program that included a large number and variety of both real and allegorical figures.

On May 3, 2010, citing security concerns and as part of the building's modernization project, the Supreme Court announced that the public (including parties to the cases being argued, the attorneys who represent them, and visitors to Oral arguments or the building) would no longer be allowed to enter the building through the main door on top of the steps on the west side.[12] Visitors must now enter through ground-level doors located at the plaza, leading to a reinforced area for security screening. The main doors at the top of the steps may still be used to exit the building.[12] Justice Breyer released a statement, joined by Justice Ginsburg, expressing his opinion that although he recognizes the security concerns that led to the decision, he does not believe on balance that the closure is justified.[13] Calling the decision "dispiriting", he said he was not aware of any Supreme Court in the world that had closed its main entrance to the public.[13]

All visitors to the Court must pass through metal-detectors and have their belongings X-rayed. Cameras are permitted in the building, but no recording devices of any kind, audio, or visual, are ever permitted in the Courtroom. When the Court is not in session, visitors can walk through the Great Hall and public areas on the ground floor, including the cafeteria and a small movie theater presenting a documentary of the Court, and guided lectures are periodically given in the Courtroom, which is not otherwise accessible. The schedule for the lectures can be confirmed on the Court's website the day before a visit. The line for these tours forms in a designated area to the side of the Courtroom doors.[14]

When the Court is in session, the Great Hall is not open to the public, except for those attending Court. The arguments are typically held in two-week cycles of a 10 A.M. and 11 A.M. argument on Mondays, Tuesdays, and Wednesdays.[15] Depending on the significance of the case and the time of year (winter arguments are less popular), visitors should arrive at the Court anywhere from two hours in advance to, in extremely controversial cases, the night before. At some point in the morning, which is not predetermined, the Supreme Court Police Officers distribute numbered tickets. These serve as place-holders only and not a guarantee of admission. Visitors who have tickets may leave the area and return at the appointed time to line up in numerical order, usually one hour before the argument. At this time, there usually are several hundred persons waiting outside the Court, most of whom are not able to observe either argument.[16] While the Courtroom does have seating for some 250 public visitors, in practice there are almost always large groups of students or officials that reduce that number, and visitors who are admitted to observe the first argument generally stay for the second argument, making the total seats available for the second argument generally very small. Just before the first argument, the officers divide the crowd into two lines: one is for those waiting with tickets to observe the entire argument, while the other is to observe a five-minute span of the argument while standing in the back of the Courtroom. Both lines remain in place during the first argument. Visitors must stand when the Justices enter and leave, and remain absolutely silent. Drowsy, noisy, or otherwise disruptive visitors are promptly removed by plainclothes officers. Parents are strongly discouraged from bringing small children.[14]

On Sunday, January 13, 2002, a wild fox wandered into the building. Although spotted by a police officer and observed on video cameras, the fox eluded capture for more than a day.[17]