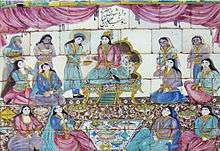 Zuleika (Arabic: زلیخا‎‎) is the name given to the Biblical Potiphar's wife in Jewish and Muslim tradition, although she is only mentioned as the "wife of Aziz" in the Qur'an. The word 'Azeez' is the Qur'an's honorific title designated for Potiphar.

The best known tale about Zuleika is told the Bible and in the Qur'an.

According to the story, Zuleika was mocked by other aristocratic Egyptian ladies, her circle of friends, for being infatuated with a Hebrew slave boy. Inviting her friends to her home, Zuleika gave them all apples and knives to slice them with. While they engaged in this task, Zuleika had Joseph walk through the room. Distracted by his handsomeness, all the ladies accidentally cut themselves with the knives, drawing blood. Zuleika then reminded her friends that she had to see Joseph every day. Following this incident, her contemporaries no longer mocked her.[1]

Christian and other scriptural commentators have regarded Zuleika as a sinner and villainess. Notable exceptions are the great Sufi mystic poets Rumi and Hafiz. For Rumi, Zuleika's obsession with Joseph is a symptom and manifestation of the soul's great deep longing for God. This, he insists, is true of any person's deep love for another. Jewish commentators also see some good motives in her actions. Rashi comments that the wife of Potiphar saw through astrology that she would have children through Joseph. The astrological calculations however were slightly off. Her adoptive daughter became the wife of Joseph and therefore the wife of Potiphar begot grandchildren (not children) through Joseph.