This article is about the Qu'ranic prophet. For other uses, see Idris.

Idris ibn Yard ibn Mahla'il‘[2] (Arabic: إدريس‎‎) is an ancient prophet mentioned in the Qur'an. He is considered to be the second prophet in Islam after Adam. He is described in the Qur'an as "trustworthy" and "patient"[3] and the Qur'an also says that he was "exalted to a high station",[4][5] Because of this and other parallels, traditionally Idris has been identified with the Biblical Enoch,[6] and therefore Islamic tradition usually places Idris in the early Generations of Adam, and considers him one of the oldest prophets mentioned in the Qur'an, placing him sometime between Adam and Noah.[7] Idris' unique status[8] inspired many future traditions and stories surrounding him in Islamic lore.

According to hadith, narrated by Malik ibn Anas and found in Sahih Muslim, it is said that on Muhammad's Night Journey, he encountered Idris in the fourth heaven.[9] The traditions that have developed around the figure of Idris have given him the scope of a prophet as well as a philosopher and mystic,[10] and many later Muslim mystics, or Sufis, including Ruzbihan Baqli and Ibn Arabi, also mentioned having encountered Idris in their spiritual visions.[11]

The name "Idris", إدريس, has been described as perhaps having the origin of meaning "interpreter."[12] Traditionally, Islam holds the prophet as having functioned an interpretive and mystical role and therefore this meaning garnered a general acceptance. Later Muslim sources, those of the eighth century, began to hold that Idris had two names, "Idris" and "Enoch," and other sources even stated that "Idris' true name is Enoch and that he is called Idris in Arabic because of his devotion to the study of the sacred books of his ancestors Adam and Seth."[13] Therefore, these later sources also highlighted Idris as either meaning "interpreter" or having some meaning close to that of an interpretive role. Several of the classical commentators on the Qur'an, such as Al-Baizawi, said he was "called Idris from the Arabic dars, meaning "to instruct," from his knowledge of divine mysteries."[14]

Idris's father was Yarid and his mother was Barkanah. Idris's wife was a woman named Aadanah. Idris also had a son whose name was Methuselah; who would eventually be the grandfather of Prophet Nuh (Noah). This means that Idris was the great-grandfather of Noah.[15]

Idris is mentioned twice in the Qur'an, where he is described as a wise man. In chapter 19 of the Qur'an, God says:

Idris was born in Babylon, a city in present-day Iraq. Before he received the Revelation, he followed the rules revealed to Prophet Seth, the son of Adam. When Idris grew older, Allah bestowed Prophethood on him. During his lifetime all the people were Muslim; no one associated partners with Allah. Afterwards, Idris left his hometown of Babylon because a great number of his people committed many sins even after he told them not to do so. Some of the Muslims left with Idris. It was hard for them to leave their home.

They asked Prophet Idris: "If we leave Babylon, where will we find a place like it?" Prophet Idris said: "If we immigrate for the sake of Allah, He will provide for us." So the people went with Prophet Idris and they reached the land of Egypt. They saw the Nile River. Idris stood at its bank and mentioned Allah, the Exalted, by saying: "Subhanallah."[18]

Islamic literature narrates that Idris was made prophet at around 40, which parallels the age when Muhammad began to prophesy, and lived during a time when people had begun to worship fire.[19] Exegesis embellishes upon the lifetime of Idris, and states that the prophet divided his time into two. For three days of the week, Idris would preach to his people and four days he would devote solely to the worship of God.[19] Many early commentators, such as Tabari,[20] credited Idris with possessing great wisdom and knowledge.

Exegesis narrates that Idris was among "the first men to use the pen as well as being one of the first men to observe the movement of the stars and set out scientific weights and measures."[19] These attributes remain consistent with the identification of Enoch with Idris, as these attributes make it clear that Idris would have most probably lived during the Generations of Adam,[19] the same era during which Enoch lived. Ibn Arabi described Idris as the "prophet of the philosophers" and a number of works were attributed to him.[21] Some scholars wrote commentaries on these supposed works,[22] all while Idris was also credited with several inventions, including the art of making garments.[21]

The commentator Ibn Ishaq narrated that he was the first man to write with a pen and that he was born when Adam still had 308 years of his life to live. In his commentary on the Quranic verses 19:56-57, the commentator Ibn Kathir narrated "During the Night Journey, the Prophet passed by him in fourth heaven. In a hadith, Ibn Abbas asked Ka’b what was meant by the part of the verse which says, ”And We raised him to a high station.” Ka’b explained: Allah revealed to Idris: ‘I would raise for you every day the same amount of the deeds of all Adam’s children’ – perhaps meaning of his time only. So Idris wanted to increase his deeds and devotion. A friend of his from the angels visited and Idris said to him: ‘Allah has revealed to me such and such, so could you please speak to the angel of death, so I could increase my deeds.’ The angel carried him on his wings and went up into the heavens. When they reached the fourth heaven, they met the angel of death, who was descending down towards earth. The angel spoke to him, about what Idris had spoken to him before. The angel of death said: ‘But where is Idris?’ He replied, ‘He is upon my back.’ The angel of death said: ‘How astonishing! I was sent and told to seize his soul in the fourth heaven. I kept thinking how I could seize it in the fourth heaven when he was on the earth?’ Then he took his soul out of his body, and that is what is meant by the verse: ‘And We raised him to a high station.’[23]

Early accounts of Idris' life attributed "thirty portions of revealed scripture" to him.[14] Therefore, Idris was understood by many early commentators to be both a prophet as well as a messenger. Several modern commentators have linked this sentiment with Biblical apocrypha such as the Book of Enoch and the Second Book of Enoch.[14] 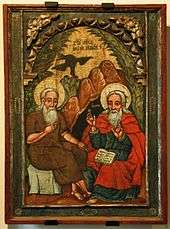 Idris is generally accepted to be the same as Enoch. Many of the early Qur'anic commentators, such as Tabari and Al-Baizawi identified Idris with Enoch. Al-Baizawi said: "Idris was of the posterity of Seth and a forefather of Noah, and his name was Enoch (ar. Uhnukh)"[14] Classical commentators used to popularly identify Idris with Enoch, the patriarch who lived in the Generations of Adam. An example is İsmail Hakkı Bursevî's commentary on Fusus al-hikam by Muhyiddin ibn ʻArabi.[24] Modern scholars, however, do not concur with this identification because they argue that it lacks definitive proof. As Qur'anic translator Abdullah Yusuf Ali says in note 2508 of his translation:

Idris is mentioned twice in the Quran, viz., here and in Chapter 21, verse 85, where he is mentioned as among those who patiently persevered. His identification with the Biblical Enoch, may or may not be correct. Nor are we justified in interpreting verse 57 here as meaning the same thing as in Genesis, v.24 ("God took him"), that he was taken up without passing through the portals of death. All we are told is he was a man of truth and sincerity, and a prophet, and that he had a high position among his people.
— Abdullah Yusuf Ali, The Holy Qur'an: Text, Translation and Commentary[25]

Bahá'u'lláh, founder of the Bahá'í Faith, wrote in one of his tablets:

The first person who devoted himself to philosophy was Idris. Thus was he named. Some called him also Hermes. In every tongue he hath a special name. He it is who hath set forth in every branch of philosophy thorough and convincing statements. After him Balínús derived his knowledge and sciences from the Hermetic Tablets and most of the philosophers who followed him made their philosophical and scientific discoveries from his words and statements...