This article is about the biblical sister of Moses. For other uses, see Miriam (disambiguation). 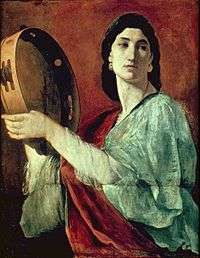 Miriam (Hebrew: מִרְיָם, Modern Miryam, Tiberian Miryām; see Miriam (given name)), according to the Hebrew Bible or Old Testament, was the elder sister of Moses by seven years and Aaron by four years, and the only daughter of Amram and Jochebed. She was a prophet and first appears in the Book of Exodus. 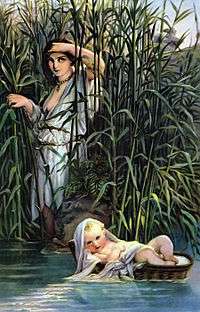 Miriam watching over the infant Moses

In Exodus 2 narrates that at her mother Yocheved's request, Moses's sister hid her baby brother Moses by the side of a river to evade the Pharaoh's order that newborn Hebrew boys be killed. She watched as the Pharaoh's daughter discovered the infant and decided to adopt him. Moses's sister then suggested that the princess take on a nurse for the child, and suggested Yocheved; as a result, Moses was raised to be familiar with his background as a Hebrew. (Exodus 2:1-10)

Miriam danced and sang a victory song recorded briefly in the Bible as the shorter 'Song of the Sea' after Pharaoh's army was drowned in the Red Sea (Exodus 15:20-21).[1]

"Sing to the Lord, for he has triumphed gloriously;
Horse and rider he has thrown into the sea."

Numbers 12 narrates Aaron and Miriam both objecting to the marriage of Moses to a Cushite woman, to which God responds by appearing in a pillar of cloud and expressing support for Moses. Afterwards, only Miriam is struck with tzaraat; after Aaron asks Moses to intercede for her, Moses asks God to heal her, and she recovers within seven days. (Numbers 12)

A passage in Micah mentions her: “And I brought you forth out of the land of Egypt, and redeemed you from the house of bondage, and I sent before you Moses, and Aaron, and Miriam." (Micah 6:4) 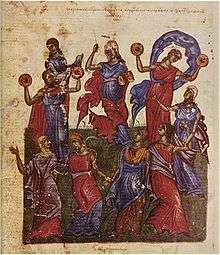 "And Miriam the prophetess, the sister of Aaron, took a timbrel in her hand; and all the women went out after her with timbrels and with dances." (Exodus 15:20).Illuminated manuscript, Tomić Psalter, 1360/63, Moscow State Historical Museum

Josephus in Antiquities of the Jews states that Miriam was the wife of Hur who is mentioned in Exodus as a close companion of Moses.[2] However, in the Targum to I Chron. ii. 19, iv. 4, Miriam is said to be Hur's mother, asserting that Ephrath, the wife of Caleb, was another name for Miriam.

Zipporah is elsewhere identified as the wife of Moses, so the traditional Jewish and Christian view is that Zipporah is the woman that Miriam opposes. However, Zipporah is described as being from Midian, which is in modern Arabia.

Josephus and Irenaeus identify the Cushite woman as Tharbis.

According to the Hebrew Bible anyone with tzaraat was tamei. (Leviticus 13-14) The Rabbis of the Talmud noted that Aaron did not receive the same punishment as his sister: otherwise he would no longer have been able to perform his duties as high priest.

According to Richard E. Friedman, because Cush refers to "Ethiopia" (which in ancient resources refers to the region of Nubia in modern Sudan) or other lands well outside, the “Cushite woman” of the story is not Zipporah. Friedman, building on interpretations from the documentary hypothesis, notes that Zipporah is only mentioned in the Jahwist text, while the story of Snow-white Miriam is assigned to the Elohist, and so, in each, Moses only ever has one wife.[3]

According to Friedman's interpretation, these two accounts reflected the stories of two different, rival priesthoods, the Aaronid priesthood in the Kingdom of Judah, which claimed descent from Aaron and which controlled the Temple in Jerusalem, and a priesthood based at Shiloh, in the Kingdom of Israel. Friedman asserts that various biblical tales were created or publicized by these factions in order to add an aura of legitimacy to their various claims to privilege and power. According to Friedman, the Elohist was from, or supported, the Shiloh priesthood, and thus had a strong motivation to repeat or create this tale.[3]

According to Numbers 20:1-2, when the Israelites on their journey to the Land of Canaan came into the wilderness of Zin in the first month, and the people stayed in Kadesh, Miriam died and was buried there. After her death, a spring of abundant water called Meribah opened. (Numbers 20:7-13)

Rashi’s commentary on Exodus 15, based on the Mekhilta (Be-Shalah, ch. 10), states “Moses chanted a song for the men; he would chant for them and they would answer him. And Miriam chanted a song for the women.” In other words, the Song on the Sea was recited twice, for the men and the women in parallel. Moses chanted the song in its entirety for the men, who answered him in refrain, and Miriam repeated this procedure for the women.

Miriam is a popular figure among some Jewish feminists. Some seders (including the original Women's Seder, but not limited to women-only seders) now set out a cup for Miriam as well as the traditional cup for the prophet Elijah, sometimes accompanied by a ritual to honor Miriam.[4] Miriam's cup originated in the 1980s in a Boston Rosh Chodesh group; it was invented by Stephanie Loo, who filled it with mayim hayim (living waters) and used it in a feminist ceremony of guided meditation.[5] Miriam's cup is linked to the midrash of Miriam's well, which "is a rabbinic legend that tells of a miraculous well that accompanied the Israelites during their 40 years in the desert at the Exodus from Egypt".[6][7]

Some Modern Orthodox Jews have revived a millennium-old custom of adding a piece of fish to the seder plate, with the lamb, egg and fish jointly symbolizing the three prophets referred to in Micah 6:4, and also alluding to the mythical beasts (the bird Ziz, the land beast Behemoth, and the sea-creature Leviathan) which, according to Midrash, are to be served at the Seudat Chiyat HaMatim, the feast for the righteous following the resurrection of the dead, which the Passover Seder (and the Cup of Elijah) allude to. The fish represents Leviathan as well as Miriam and is also a water symbol.[8]

In the Qur'an as in the Hebrew Bible, she obeys her mother's request to follow the baby Moses as he floats down the river in a basket, their mother having set him afloat so he would not be killed by the Pharaoh's servants and soldiers (28:11). Later on, Asiya, wife of the Pharaoh, finds Moses at the river and adopts him as her own, but Moses refuses to be suckled by her. Miriam asks the Pharaoh's wife and her handmaidens to have his own mother act as nursemaid to Moses, the mother's identity not being known to the Pharaoh's wife (28:12–13).