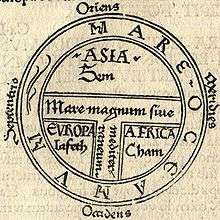 This T and O map, from the first printed version of Isidore's Etymologiae, identifies the three known continents as populated by descendants of Sem (Shem), Iafeth (Japheth) and Cham (Ham). 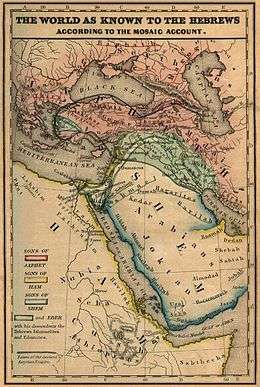 The Generations of Noah or Table of Nations (Genesis 10 of the Hebrew Bible) is a traditional ethnology representing the expansion of humankind from the descendants of Noah and their dispersion into many lands after the Flood.[1] The term "nations" to describe the descendants is a standard English translation of the Hebrew word "goy", following the c.400 CE Latin Vulgate's "nationes" / "nationibus", and does not have the same political connotations that the word entails today.[2]

The list of 70 names introduces for the first time a number of well known ethnonyms and toponyms important to biblical geography[3] such as Noah's three sons Shem, Ham and Japheth, from which is derived Semitic, Hamitic and Japhetites, certain of Noah's grandsons including Elam, Ashur, Aram, Cush, and Canaan, from which the Elamites, Assyrians, Arameans, Cushites and Canaanites, as well as further descendants including Eber (from which "Hebrews"), the hunter-king Nimrod, the Philistines and the sons of Canaan including Heth, Jebus and Amorus, from which Hittites, Jebusites and Amorites.

As Christianity took over the Roman world, it adopted the idea that all the world's peoples were descended from Noah. But the tradition of Hellenistic Jewish identifications of the ancestry of various peoples, which concentrates very much on the Mediterranean world and the Near East and is described below, became stretched. Northern peoples important to the Late Roman and medieval world, such as the Celts, Slavs, Germans and Norsemen were not covered, nor were others of the world's peoples. A variety of arrangements were devised by scholars, with for example the Scythians, who do feature in the tradition, being claimed as the ancestors of much of northern Europe.[4]

According to Joseph Blenkinsopp, the 70 names in the list express symbolically the unity of the human race, corresponding to the 70 descendants of Israel who go down into Egypt with Jacob at Genesis 46:27 and the 70 elders of Israel who visit God with Moses at the covenant ceremony in Exodus 24:1–9.[5] 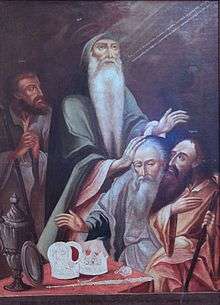 Chapters 1–11 of the Book of Genesis are structured around five toledot statements ("these are the generations of..."), of which the "generations of the sons of Noah, Shem, Ham, and Japheth," is the fourth. Events before the Genesis flood narrative, the central toledoth, correspond to those after: the post-Flood world is a new creation corresponding to the Genesis creation narrative, and like Adam, Noah has three sons who will populate the world. The correspondences extend forward as well: there are 70 names in the Table, corresponding to the 70 Israelites who go down into Egypt at the end of Genesis and to the 70 elders of Israel who go up the mountain with Sinai to meet with God in Exodus. The symbolic force of these numbers is underscored by the way the names are frequently arranged in groups of seven, suggesting that the Table is a symbolic means of implying universal moral obligation.[6]

The overall structure of the Table is:

The overall principle governing the assignment of various peoples within the Table is difficult to discern: it purports to describe all humankind, but restricts itself to the Egyptian lands of the south, the Mesopotamian lands, and Anatolia and the Ionian Greeks, and the "sons of Noah" are not organised by geography, language or ethnic groups within these regions.[8] The Table is in fact filled with difficulties: for example, the names Sheba and Havilah are listed twice, first as descendants of Cush the son of Ham (verse 7), and then as sons of Joktan, the great-grandsons of Shem, and while the Cushites are African in verses 6–7 they are Mesopotamians in verses 10–14.[9]

The date of composition of Genesis 1–11 cannot be fixed with any precision, although it seems likely that an early brief nucleus was later expanded with extra data.[10] Portions of the Table itself may derive from the 10th century, while others reflect the 7th century and priestly revisions in the 5th century.[1] Its combination of world review, myth and genealogy corresponds to the work of the Greek historian Hecataeus of Miletus, active c.520 BCE.[11]

I Chronicles 1 includes a version of the Table of Nations from Genesis, but edited to make clearer that the intention is to establish the background for Israel. This is done by condensing various branches to focus on the story of Abraham and his offspring. Most notably, it omits Genesis 10:9–14, in which Nimrod, a son of Cush, is linked to various cities in Mesopotamia, thus removing from Cush any Mesopotamian connection.[12]

The Table of Nations is expanded upon in detail in chapters 8–9 of the Book of Jubilees, sometimes known as the "Lesser Genesis," a work from the early Second Temple period.[13] Jubilees is considered Pseudepigraphical by most Christian and Jewish sects but thought to have been held in regard by many of the Church Fathers.[14] Its division of the descendants throughout the world are thought to have been heavily influenced by the "Ionian world map" described in the Histories (Herodotus),[15] and the anomalous treatment of Canaan and Madai are thought to have been "propaganda for the territorial expansion of the Hasmonean state".[16]

The Hebrew bible was translated into Greek in Alexandria at the request of Ptolemy II, who reigned over Egypt 285–246 BCE.[17] Its version of the Table of Nations is substantially the same as that in the Hebrew text, but with the following differences: 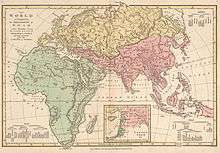 1823 map by Robert Wilkinson (see also 1797 version here). Prior to the mid-19th century, Shem was associated with all of Asia, Ham with all of Africa and Japheth with all of Europe.

The Flood story tells how Noah and his three sons Shem, Ham, and Japheth, together with their wives, were saved from the Deluge to repopulate the Earth. 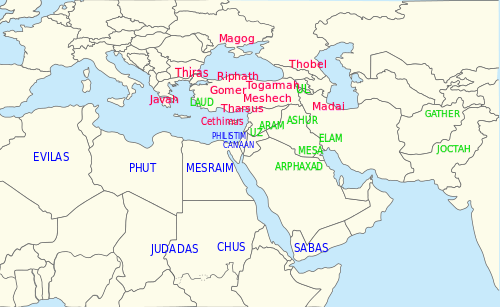 The 1st-century Jewish-Roman historian Josephus, in Antiquities of the Jews Book 1, chapter 6, was among the first of many who attempted to assign known ethnicities to some of the names listed in Genesis chapter 10. His assignments became the basis for most later authors, and were as follows:[25] Woodcut from the Nuremberg Chronicle, showing Shem, Ham and Japheth over their corners of the world

Hippolytus of Rome, in his Diamerismos (c. 234, existing in numerous Latin and Greek copies),[26] made another attempt to assign ethnicities to the names in Genesis 10. It is thought to have been based on the Book of Jubilees.[27]

Its differences versus that of Josephus are shown below:

The Chronography of 354, the Panarion by Epiphanius of Salamis (c. 375), the Chronicon Paschale (c. 627), the History of Albania by the Georgian historian Movses Kaghankatvatsi (7th century), and the Synopsis of Histories by John Skylitzes (c. 1057) follow the identifications of Hippolytus.

Jerome, writing c. 390, provided an 'updated' version of Josephus' identifications in his Hebrew Questions on Genesis. His list is substantially identical to that of Josephus in almost all respects, but with the following notable differences:

In Isidore of Seville and later authors

The scholar Isidore of Seville, in his Etymologiae (c. 600), repeats all of Jerome's identifications, but with these minor changes:[28]

Isidore's identifications for Japheth's sons were repeated in the Historia Brittonum attributed to Nennius. Isidore's identifications also became the basis for numerous later mediaeval scholars, remaining so until the Age of Discovery prompted newer theories, such as that of Benito Arias Montano (1571), who proposed connecting Meshech with Moscow, and Ophir with Peru.

While Genesis 10 was covered extensively by numerous Christian, Jewish and Muslim scholars over many centuries, the phrase "Table" of nations only appeared and became popular in English from the 1830s.

Other interpretations: Descendants of Japheth 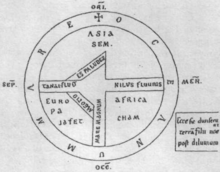 The Greek Septuagint (LXX) text of Genesis includes an additional son of Japheth, "Elisa", between Javan and Tubal; however, as this name is found in no other ancient source, nor in I Chronicles, he is almost universally agreed to be a duplicate of Elisha, son of Javan. The presence of Elisa and of Cainan son of Arpachshad (below) in the Greek Bible accounts for the traditional enumeration among early Christian sources of 72 names, as opposed to the 70 names found in Jewish sources and Western Christian sources.

Other interpretations: Descendants of Ham

Beginning in the 9th century with the Jewish grammarian Judah ibn Quraysh, a relationship between the Semitic and Cushitic languages was seen; modern linguists group these two families, along with the Egyptian, Berber, Chadic, and Omotic language groups into the larger Afro-Asiatic language family. In addition, languages in the southern half of Africa are now seen as belonging to several distinct families independent of the Afro-Asiatic group. Some now discarded Hamitic theories have become viewed as racist; in particular a theory proposed in the 19th century by Speke, that the Tutsi were supposedly of some Hamitic ancestry and thus inherently superior.[48]

The 17th-century Jesuit, Athanasius Kircher, thought that the Chinese had also descended from Ham, via Egyptians.

Other interpretations: Descendants of Shem

There exist various traditions in post-biblical sources claiming that Noah had children other than Shem, Ham, and Japheth — born variously before, during, or after the Deluge.

According to the Quran (Hud 42–43), Noah had another unnamed son who refused to come aboard the Ark, instead preferring to climb a mountain, where he drowned. Some later Islamic commentators give his name as either Yam or Kan'an.[54]

According to Irish mythology, as found in the Annals of the Four Masters and elsewhere, Noah had another son named Bith who was not allowed aboard the Ark, and who attempted to colonise Ireland with 54 persons, only to be wiped out in the Deluge.

An early Arabic work known as Kitab al-Magall "Book of Rolls" (part of Clementine literature) mentions Bouniter, the fourth son of Noah, born after the flood, who allegedly invented astronomy and instructed Nimrod.[55] Variants of this story with often similar names for Noah's fourth son are also found in the c. fifth century Ge'ez work Conflict of Adam and Eve with Satan (Barvin), the c. sixth century Syriac book Cave of Treasures (Yonton), the seventh century Apocalypse of Pseudo-Methodius (Ionitus[56]), the Syriac Book of the Bee 1221 (Yônatôn), the Hebrew Chronicles of Jerahmeel, c. 12th–14th century (Jonithes), and throughout Armenian apocryphal literature, where he is usually referred to as Maniton; as well as in works by Petrus Comestor c. 1160 (Jonithus), Godfrey of Viterbo 1185 (Ihonitus), Michael the Syrian 1196 (Maniton), Abu al-Makarim c. 1208 (Abu Naiţur); Jacob van Maerlant c. 1270 (Jonitus), and Abraham Zacuto 1504 (Yoniko).

Martin of Opava (c. 1250), later versions of the Mirabilia Urbis Romae, and the Chronicon Bohemorum of Giovanni di Marignola (1355) make Janus (the Roman deity) the fourth son of Noah, who moved to Italy, invented astrology, and instructed Nimrod.

According to the monk Annio da Viterbo (1498), the Hellenistic Babylonian writer Berossus had mentioned 30 children born to Noah after the Deluge, including sons named Tuisto, Prometheus, Iapetus, Macrus, "16 titans", Cranus, Granaus, Oceanus, and Tipheus. Also mentioned are daughters of Noah named Araxa "the Great", Regina, Pandora, Crana, and Thetis. However, Annio's manuscript is widely regarded today as having been a forgery.[57]

The sons of Noah are not expressly mentioned in the Quran, except for the fact that one of the sons was among the people who did not follow his own father, not among the believers and thus was washed away in the flood. Also the Qur'an indicates a great calamity, enough to have destroyed Noah's people, but to have saved him his followers and his generations to come.[58]

Daniel A. Machiela (2009). "A Comparative Commentary on the Earths Division". The Dead Sea Genesis Apocryphon: A New Text and Translation With Introduction and Special Treatment of Columns 13–17. BRILL. ISBN 9789004168145.