Sulaiman ibn Dawud (Arabic: سـلـيـمـان ابـن داوود‎‎, Sulaymān ibn Dāwūd, Solomon son of David) was, according to the Qur'an,[1][2][3][4][5] a Malik (Arabic: مَـلِـك‎‎, King) and Nabi (Arabic: نَـبِي‎‎, Prophet) of ancient Israel. Islamic tradition generally holds that ibn Dawud was the third King of Israel, and a just and wise ruler for the nation.[6]

Islam views Solomon as one of the elect of Allah, who was bestowed upon with many God-given gifts, including the ability to speak to animals[7] and control jinn.[8] Muslims further maintain that Solomon remained faithful to a one and only God throughout his life;[9] constructed his Temple, which became one of the key houses of worship; reigned justly over the whole of the Kingdom of Israel; was blessed with a level of Kingship which was given to none after him and before him;[10] and fulfilled all of his commandments, being promised nearness to God in Heaven at the end of his life.[11] Solomon remains one of the most commemorated and popular holy figures in Islam. Islamic tradition further maintains that, along with David (Dāwūd) and Dhul-Qarnayn, Solomon was one of greatest monarchs of all time.[12]

Narrative in the Qur’an

Judgment on the harth

In the earliest narrative involving Solomon, the Qur’an says that Solomon was in the company of his father, when two men came to ask David to judge between them regarding a harth (Arabic: حَـرث‎‎, field).[13] The first of the two men said that he owned a vineyard of which he took great care the whole year through. But one day, when he was absent, the other man's sheep had strayed into the vineyard and devoured the grapes. He asked to be compensated for this damage.[14] Upon hearing the man's complaint, Solomon suggested that the owner of the sheep take the other man's vineyard to repair and cultivate until the vines returned to their former state, whereupon he should return it to its owner. At the same time, the owner of the vineyard would care for the sheep and benefit from their wool and milk until his land was returned to him, at which point he would return the sheep to their owner. Solomon's level of judgment, which the Qur’an says in this particular incident surpassed that of David,[15] would characterize Solomon throughout his life. Hikmah (Arabic: حِـكـمـة‎‎) (Wisdom), according to Muslim tradition, would always be associated with Solomon, who would later even be referred to as "Sulaiman al-Hakim" (Arabic: سُـلـيـمـان الـحَـكـيـم‎‎, Solomon the Wise). 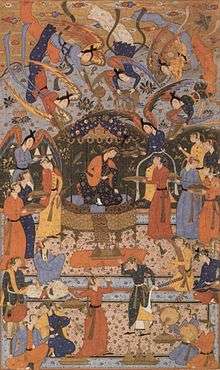 The Queen of Sheba’

When David died, Solomon inherited his position as the Prophetic King of the Israelites. He prayed to God to grant him a Kingdom which would be greater than that of any after him and before him.[10] God accepted Solomon's prayer and gave him what he pleased. It was at this stage that Solomon began to acquire the many gifts that God would bestow upon him throughout his life. The Qur’an narrates that the wind was made subservient to Solomon,[8] and he could control it of his own will, and that the jinn also came under Solomon's control. The jinn helped strengthen Solomon's reign, building for him monuments, houses of worship, artwork, and reservoirs.[16] God also caused a miraculous ‘ayn (Arabic: عَـيـن‎‎) (fount or spring) of molten qitr (Arabic: قِـطـر‎‎) (brass or copper) to flow for Solomon, to be used by the jinn in their construction.[8] Solomon was even taught the languages of various animals, in particular, the birds. The Qur’an recounts that, one day, Solomon and his army entered a valley, where there were many ant colonies. On seeing Solomon and his army, one of the ants warned all the others to "...get into your habitations, lest Solomon and his hosts crush you (under foot) without knowing it."[17] Immediately understanding what the ant said, Solomon, as always, prayed to God, thanking Him for bestowing upon him such gifts[18] and further avoided trampling over the ant colonies.[19] Solomon's wisdom, however, was yet another of the gifts he received from God, and Muslims strongly maintain that Solomon never forgot his daily prayer, which, to him, was more important than any of his gifts.

Another important aspect of Solomon's kingship was the size of his army, which consisted of both men and jinn. Solomon would frequently assess his troops and warriors as well as the jinn and all the animals who worked under him. One day, when inspecting his troops, Solomon found the Hud-hud (Arabic: هُـدهـد‎‎, Green peafowl or Hoopoe) missing from the assembly.[3] Shortly later, however, the Hud-hud arrived to Solomon's court, saying "I have compassed (territory) which thou hast not compassed, and I have come to thee from Saba’ with tidings true."[20] Thus, the Hud-hud informed Solomon about the kingdom of Sheba’. He further told Solomon that the people of Sheba’ worshiped the sun, but that the woman who ruled the Kingdom was highly intelligent and powerful. Solomon, who listened closely, chose to write a letter to the land of Sheba’, through which he would try to convince the people of Sheba’ to cease in worshiping the sun and to come to the worship of God. Solomon ordered the Hud-hud to give the letter to the Queen of Sheba’, and then to hide and observe her reaction.[21] The Hud-hud accepted Solomon's orders, and flew to give the letter to her. The Queen then called her ministers in the court and announced the letter of Solomon stating to the people of Sheba’: "In the name of Allah, I warned you to stop worshiping the sun, and accept Allah as the only God, with Solomon as His Messenger." She asked for suggestions from her minister and administration stating that "O my people I know that you all are powerful and brave warriors and no one on the face of the earth can defeat our army, but still I want your opinion." The people of the court replied: "You have all the power and authority and whatever order you deliver, you will find us obedient." Then Queen decided to send some gifts and offerings to Solomon. 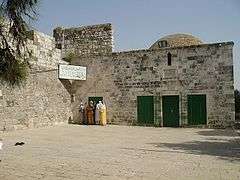 According to the Qur’an, the death of Solomon was a lesson to be learned,

Then, when We decreed (Solomon's) death, nothing showed them his death except a little worm of the earth, which kept (slowly) gnawing away at his staff: so when he fell down, the Jinn saw plainly that if they had known the unseen, they would not have tarried in the humiliating Penalty (of their Task).
— Qur’an, surah 34 (Saba’), ayah 14[22]

Mahammadim in the Song of Solomon

Main article: Muhammad in the Bible

As inspired by Verses of the Qur’an,[23][24] Muslims would imply that Muhammad ibn ‘Abdullah is mentioned in the Song of Songs, Chapter 5, citing the consonantal similarity between Muhammad's Arabic name (Arabic: مُـحَـمَّـد‎‎, consonant letters: m-ħ-m-d) and the Hebrew word in the 16th Verse translated as "Altogether lovely," that is "Mahammaddim" (Hebrew: מַחֲמַדִּים‎‎, consonant letters: m-ħ-m-d-y-m).[25][26][27][28]

References to Solomon in the Qur’an