Aquifer storage and recovery (ASR) is the re-injection of potable water back into an aquifer for later recovery and use. ASR has been done for municipal, industry and agriculture use.

ASR use in the United States

Doubts remain about the benefit of introducing ASR in such large capacity to Florida due to a predominantly karst geography. Current or potential problems include: (1) poor recovery due to mixing of the injected fresh water with the existing brackish to saline water in the aquifer; (2) pre-existing quality of water introduced to ASR; and (3) potential risk of resulting water quality due to mixing of injected freshwater and existing aquifer.[4]

The first agriculture ASR wells were put into service in Oregon in the autumn of 2006 and have injected well over a 3,000 acre feet (3,700,000 m3) of water during the winter and spring flood flow times using artificial recharge (AR) of flood water as their water source. This shallow recharged water is then recovered as potable water and injected into the deep basalt aquifer.

During the injection process, electrical energy can be generated by the head pressure of the water flowing back into the aquifer. This stored water is recovered during late summer and early autumn for irrigation needs.

Both of these well types use a down-hole control valve. ASR can also be used to re-inject water used by HVAC systems to maintain the ground water levels and store the thermal differences from summer time cooling for winter time heating. Industry can also capture cold winter waters and store it for summer time use and avoid the need for cooling water in the summer for industrial processes. This may also free up short supplies of summer time water for other beneficial uses. This reinjection process may also avoid the cost of surface disposal and avoid the increased thermal load to the rivers and streams during the summer air conditioning season.[5]

The Texas cities of El Paso, Kerrville and San Antonio use ASR, providing water resources to these water-vulnerable communities.[6] A University of Florida report ranked daily per-capita water availability for 225 large urban areas across the U.S.[7] The study weighed fresh water available to cities from naturally occurring and constructed sources such as reservoirs, aquifers and imports. Of the cities reviewed, San Antonio ranked last, or most vulnerable, and El Paso ranked as 10th-worst, though other Texas cities made the list.[6]

San Antonio stores drinking water in its Carrizo ASR facility, which contains more than 91,000 acre-feet of water and has a maximum capacity of 120,000 acre-feet.[6]

A 2010 Texas Water Development Board (TWDB) survey of Texas water utilities found four primary objections to ASR in other parts of Texas: legal and physical limitations, the quality of the recovered water, cost-effectiveness and the potential for other pumpers to capture the utility’s stored water.[6]

ASR use in Australia 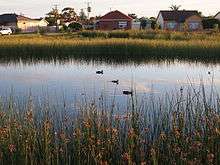 In South Australia, the City of Salisbury in northern Adelaide has since 1994 played a pioneering role in establishing the viability of the capture and treatment of urban stormwater runoff within artificial wetlands, and injecting the treated water into Tertiary aquifers in winter, for later use by industry, and for irrigation of city parks and school playing fields in summer.[9] In 2009 the capacity of the Salisbury ASR schemes was around 5 gigalitres per annum (expected to rise to 14 GL by 2014)[10] and this success has led to other local government areas across Adelaide undertaking similar ASR projects.