This article is about human-curated repositories of seeds. For other uses, see Seed bank (disambiguation). 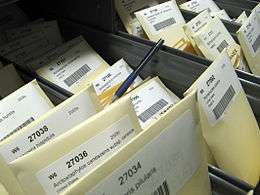 A seed bank (also seedbank or seeds bank) stores seeds to preserve genetic diversity; hence it is a type of gene bank. There are many reasons to store seeds. One reason is to have on-hand the genes that plant breeders need to increase yield, disease resistance, drought tolerance, nutritional quality, etc. of plants used in agriculture (i.e., crops or domesticated species). Another reason is to forestall loss of genetic diversity in rare or imperiled plant species in an effort to conserve biodiversity ex situ. Many plants that were used centuries ago by humans are used less frequently now and seed banks offer a way to preserve that historical and cultural value. Collections of seeds stored at constant low temperature and moisture guard against loss of genetic resources that are otherwise maintained in situ or in field collections. These alternative 'living' collections can be damaged by natural disasters, outbreaks of disease or war. Seed banks are considered seed libraries and contain valuable information about evolved strategies to combat plant stress or produce novel products. The work of seed banks spans decades and even centuries. Most seed banks are publicly funded and seeds are usually available for research that benefits the public.

Seed banks store seeds to keep them viable. Distribution of seeds from seed banks is a form of swapping seeds

The Global Seed Vault is situated in Svalbard, midway between Norway and the Arctic.

Seeds are living creatures and keeping them viable over the long term requires adjusting storage moisture and temperature appropriately. As they mature on the mother plant, many seeds attain an innate ability to survive drying. Survival of these so-called 'orthodox' seeds can be extended by dry, low temperature storage. The level of dryness and coldness depends mostly on the longevity that is required and the investment in infrastructure that is affordable. Practical guidelines from a US scientist in the 1950s and 1960s, James Harrington, are known as 'Thumb Rules.' The 'Hundreds Rule' guides that the sum of relative humidity and temperature (in Fahrenheit) should be less than 100 for the sample to survive 5 years. Another rule is that reduction of water content by 1% or temperature by 10 degrees Fahrenheit will double the seed life span. Research from the 1990s showed that there is a limit to the beneficial effect of drying or cooling, so it must not be overdone.

Understanding the effect of water content and temperature on seed longevity, the Food and Agriculture division of the United Nations and a consultancy group called Bioversity International developed a set of standards for international seed banks[1] to preserve seed longevity. The document advocates drying seeds to about 20% relative humidity, sealing seeds in high quality moisture-proof containers, and storing seeds at -20 degrees Celsius. These conditions are frequently referred to as 'conventional' storage protocols. Seeds from our most important species - corn, wheat, rice, soybean, pea, tomato, broccoli, melon, sunflower, etc.—can be stored in this way. However, there are many species that produce seeds that do not survive the drying or low temperature of conventional storage protocols. These species must be stored cryogenically. Seeds of citrus, coffee, avocado, cocoa, coconut, papaya, oak, walnut and willow are a few examples of species that should be preserved cryogenically.

Like everything, seeds eventually degrade with time. It is hard to predict when seeds lose viability and so most reputable seed banks monitor germination potential during storage. When seed germination percentage decreases below a prescribed amount, the seeds need to be replanted and fresh seeds collected for another round of long-term storage.[2]

An arboretum stores trees by planting them at a protected site.

The phenomenon of seeds remaining dormant within the soil is well known and documented (Hills and Morris 1992).[4] Detailed information on the role of such “seed banks” in northern Ontario, however, is extremely limited, and research is required to determine the species and abundance of seeds in the soil across a range of forest types, as well as to determine the function of the seed bank in post-disturbance vegetation dynamics. Comparison tables of seed density and diversity are presented for the boreal and deciduous forest types and the research that has been conducted is discussed. This review includes detailed discussions of: (1) seed bank dynamics, (2) physiology of seeds in a seed bank, (3) boreal and deciduous forest seed banks, (4) seed bank dynamics and succession, and (5) recommendations for initiating a seed bank study in northern Ontario.

Seeds may be viable for hundreds and even thousands of years. The oldest carbon-14-dated seed that has grown into a viable plant was a Judean date palm seed about 2,000 years old, recovered from excavations at Herod the Great's palace in Israel.[5]

In February 2012, Russian scientists announced they had regenerated a narrow leaf campion (Silene stenophylla) from a 32,000-year-old seed. The seed was found in a burrow 124 feet under Siberian permafrost along with 800,000 other seeds. Seed tissue was grown in test tubes until it could be transplanted to soil. This exemplifies the long-term viability of DNA under proper conditions.[6]

There are about 6 million accessions, or samples of a particular population, stored as seeds in about 1,300 genebanks throughout the world as of 2006.[7] This amount represents a small fraction of the world's biodiversity, and many regions of the world have not been fully explored.