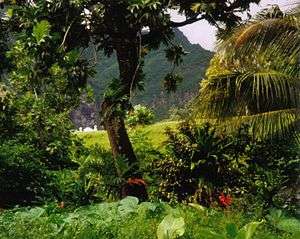 The rainforest in Fatu-Hiva, in the Marquesas Islands, is an example of an undisturbed natural resource. Forest provides timber for humans, food and shelter for the flora and fauna. The nutrient cycle between organisms form food chains and biodiversity of species. 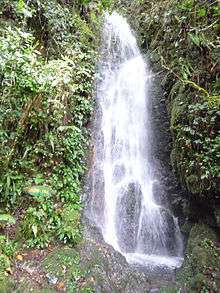 The Carson Fall in Mount Kinabalu, Malaysia is an example of undisturbed natural resource. Waterfalls provide spring water for humans, animals and plants for survival and also habitat for marine organisms. The water current can be used to turn turbines for hydroelectric generation.

The ocean is an example of a natural resource. Ocean waves can be used to generate wave power which is a renewable energy. Ocean water is important for salt production, desalination, and providing habitat for deep water fishes. There are biodiversity of marine species in the sea where nutrient cycles are common. 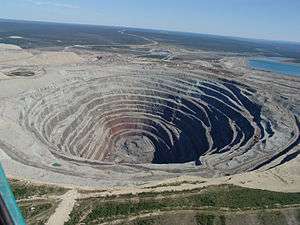 A picture of the Udachnaya pipe, an open-pit diamond mine in Siberia. An example of a non-renewable natural resource.

Natural resources are resources that exist without actions of humankind. This includes all valued characteristics such as magnetic, gravitational, and electrical properties and forces. On earth it includes: sunlight, atmosphere, water, land (includes all minerals) along with all vegetation and animal life that naturally subsists upon or within the heretofore identified characteristics and substances.[1][2][3][4]

Particular areas such as the rainforest in Fatu-Hiva are often characterized by the biodiversity and geodiversity existent in their ecosystems. Natural resources may be further classified in different ways. Natural resources are materials and components (something that can be used) that can be found within the environment. Every man-made product is composed of natural resources (at its fundamental level). A natural resource may exist as a separate entity such as fresh water, and air, as well as a living organism such as a fish, or it may exist in an alternate form which must be processed to obtain the resource such as metal ores, petroleum, and most forms of energy.

There is much debate worldwide over natural resource allocations, this is particularly true during periods of increasing scarcity and shortages (depletion and overconsumption of resources) but also because the exportation of natural resources is the basis for many economies (particularly for developed countries).

Some natural resources such as sunlight and air can be found everywhere, and are known as ubiquitous resources. However, most resources only occur in small sporadic areas, and are referred to as localized resources. There are very few resources that are considered inexhaustible (will not run out in foreseeable future) – these are solar radiation, geothermal energy, and air (though access to clean air may not be). The vast majority of resources are theoretically exhaustible, which means they have a finite quantity and can be depleted if managed improperly.

Considering their stage of development, natural resources may be referred to in the following ways:

Renewability is a very popular topic and many natural resources can be categorized as either renewable or non-renewable:

Resource extraction involves any activity that withdraws resources from nature. This can range in scale from the traditional use of preindustrial societies, to global industry. Extractive industries are, along with agriculture, the basis of the primary sector of the economy. Extraction produces raw material which is then processed to add value. Examples of extractive industries are hunting, trapping, mining, oil and gas drilling, and forestry. Natural resources can add substantial amounts to a country's wealth,[7] however a sudden inflow of money caused by a resource boom can create social problems including inflation harming other industries ("Dutch disease") and corruption, leading to inequality and underdevelopment, this is known as the "resource curse".

Extractive industries represent a large growing activity in many less-developed countries but the wealth generated does not always lead to sustainable and inclusive growth. Extractive industry businesses often are assumed to be interested only in maximizing their short-term value, implying that less-developed countries are vulnerable to powerful corporations. Alternatively, host governments are often assumed to be only maximizing immediate revenue. Researchers argue there are areas of common interest where development goals and business cross. These present opportunities for international governmental agencies to engage with the private sector and host governments through revenue management and expenditure accountability, infrastructure development, employment creation, skills and enterprise development and impacts on children, especially girls and women.[8] 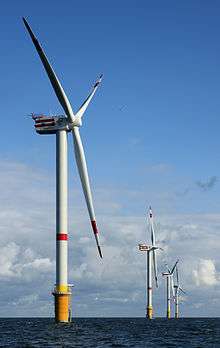 Wind is a natural resource that can be used to generate electricity, as with these 5MW wind turbines in Thorntonbank Wind Farm 28 km (17 mi) off the coast of Belgium
See also: Exploitation of natural resources

The conservation of natural resources is the fundamental problem. Unless we solve that problem, it will avail us little to solve all others.

Depletion of natural resources is associated with social inequity. Considering most biodiversity are located in developing countries,[14] depletion of this resource could result in losses of ecosystem services for these countries.[15] Some view this depletion as a major source of social unrest and conflicts in developing nations.[16]

At present, with it being the year of the forest,[17] there is particular concern for rainforest regions which hold most of the Earth's biodiversity.[17] According to Nelson[18] deforestation and degradation affect 8.5% of the world's forests with 30% of the Earth's surface already cropped. If we consider that 80% of people rely on medicines obtained from plants and ¾ of the world's prescription medicines have ingredients taken from plants,[15] loss of the world's rainforests could result in a loss of finding more potential life saving medicines.[19]

Conservation biology is the scientific study of the nature and status of Earth's biodiversity with the aim of protecting species, their habitats, and ecosystems from excessive rates of extinction.[22][23] It is an interdisciplinary subject drawing on science, economics and the practice of natural resource management.[24][25][26][27] The term conservation biology was introduced as the title of a conference held at the University of California, San Diego, in La Jolla, California, in 1978, organized by biologists Bruce A. Wilcox and Michael E. Soulé.

Habitat conservation is a land management practice that seeks to conserve, protect and restore, habitat areas for wild plants and animals, especially conservation reliant species, and prevent their extinction, fragmentation or reduction in range.[28]

Management of natural resources involves identifying who has the right to use the resources and who does not for defining the boundaries of the resource.[29] The resources are managed by the users according to the rules governing of when and how the resource is used depending on local condition.[30]

A successful management of natural resources should engage the community because of the nature of the shared resources the individuals who are affected by the rules can participate in setting or changing them.[29] The users have rights to devise their own management institutions and plans under the recognition by the government. The right to resources includes land, water, fisheries and pastoral rights.[30] The users or parties accountable to the users have to actively monitor and ensure the utilisation of the resource compliance with the rules and to impose penalty on those peoples who violates the rules.[29] These conflicts are resolved in a quick and low cost manner by the local institution according to the seriousness and context of the offence.[30] The global science-based platform to discuss natural resources management is the World Resources Forum, based in Switzerland.