The Bab-el-Mandeb (Arabic: باب المندب, lit. "Gate of Tears")[1][n 1] or Mandeb Strait[n 2] is a strait located between Yemen on the Arabian Peninsula, and Djibouti and Eritrea in the Horn of Africa. It connects the Red Sea to the Gulf of Aden. 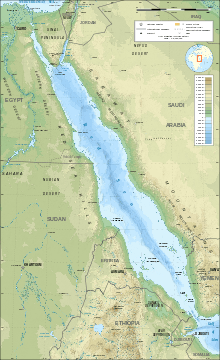 The strait derives its name from the dangers attending its navigation, or, according to an Arab legend, from the numbers who were drowned by the earthquake which separated Eritrea and Djibouti from Arabia.[1]

The distance across is about 20 miles (30 km) from Ras Menheli in Yemen to Ras Siyyan in Djibouti. The island of Perim divides the strait into two channels, of which the eastern, known as the Bab Iskender (Alexander's Strait), is 2 miles (3 km) wide and 16 fathoms (30 m) deep, while the western, or Dact-el-Mayun, has a width of about 16 miles (25 km) and a depth of 170 fathoms (310 m). Near the coast of Djibouti lies a group of smaller islands known as the "Seven Brothers". There is a surface current inwards in the eastern channel, but a strong undercurrent outwards in the western channel.[1]

According to the recent single origin hypothesis, the straits of Bab-el-Mandeb were probably witness to the earliest migrations of modern humans It is presumed that at this time, the oceans were much lower and the straits were much shallower or dry, allowing a series of emigrations along the southern coast of Asia.

According to Ethiopian Orthodox Tewahedo Church tradition, the straits of Bab-el-Mandeb were witness to the earliest migrations of Semitic Ge'ez speakers into Africa, occurring c. 1900 BC, roughly around the same time as the Hebrew patriarch Jacob.[3] The Kingdom of Aksum was a major regional power in the Horn of Africa. It extended its rule across the strait with the conquest of the Himyarite Kingdom shortly before the rise of Islam.

The United Kingdom unilaterally seized the island of Perim in 1799 on behalf of their Indian empire. They reasserted their ownership in 1857 and erected a lighthouse there in 1861, using it to command the Red Sea and the trade routes through the Suez Canal.[1]

On February 22, 2008, a company owned by Tarek bin Laden unveiled plans to build a bridge named Bridge of the Horns across the strait, linking Yemen with Djibouti.[4] Middle East Development LLC has issued a notice to construct a bridge passing across the Red Sea that would be the longest suspended passing in the world.[5] The project has been assigned to engineering company COWI in collaboration with architect studio Dissing+Weitling, both from Denmark. It was announced in 2010 that Phase 1 had been delayed and as of mid-2016 nothing more has been heard about the project.

The Bab-el-Mandeb is also a sub-region in the Arab League, which includes Djibouti, Yemen, and Somalia.