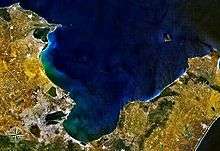 Gulf of Tunis seen from space 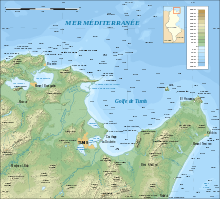 Topographic map of the Gulf of Tunis

The Gulf of Tunis (Tunisian Arabic: خليج تونس‎) is a large Mediterranean bay in north-eastern Tunisia, extending for 39 miles (63 km) from Cap Farina in the west to Cap Bon in the east.[1] Tunis, the capital city of Tunisia, lies at the south-western edge of the Gulf, as have a series of settled places over the last three millennia. Djebel Ressas rises to 795 metres (2,608 ft) around 15 kilometres (9.3 mi) south of the southern edge of the Gulf.

The central part of the gulf, correspond to the city of Tunis, which benefits of a well protected area, favorable to the implementation of an important commercial port.

The famous city of Carthage, was built on the gulf shores, now the area is a suburb of Tunis