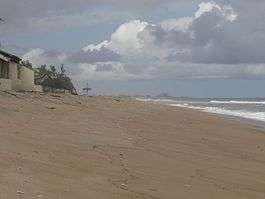 The coast of Benin with Cotonou port in the background

The Bight of Benin or Bay of Benin is a bight in the Gulf of Guinea area on the western African coast.

It extends eastward for about 400 miles (640 km) from Cape St. Paul to the Nun outlet of the Niger River. To the east it is continued by the Bight of Bonny (formerly Bight of Biafra). The Republic of Benin and this bight were both named after the Benin Empire. On December 25, 2003, UTAGE Flight 141 crashed in the Bight.

Historical associations with the Atlantic slave trade led to the region becoming known as the Slave Coast. As in many other regions across Africa, powerful indigenous kingdoms along the Bight of Benin relied heavily on a long established slave trade that expanded greatly after the arrival of European powers and became a global trade with the colonization of the Americas.[1]

The Bight of Benin has a long association with slavery, its shore being known as the Slave Coast. An old rhyme says:

Beware, beware the Bight of the Benin, for few come out though many go in.

Beware beware, the Bight of Benin: one comes out, where fifty went in!

This is said to be a slavery jingle or sea shanty about the risk of malaria in the Bight.[2] A third version of the couplet is

Beware and take care of the Bight of Benin. There's one comes out for forty goes in."[3]

The author Philip McCutchan has written a book titled Beware, beware the Bight of Benin.

A short story by Elizabeth Coatsworth, "The Forgotten Island" (1942), deals with a treasure from Benin. A variation of the rhyme is also mentioned.[4]

In Patrick O'Brian's novel The Commodore (1996), Dr. Maturin recites the rhyme when he learned of his ship's destination. Commodore Aubrey checks him, telling him it is bad luck to say that out loud on the way in.

The rhyme is also partially quoted in chapter Context(6) of John Brunner's novel Stand on Zanzibar. The Bight of Benin (as well as the fictional republic of Beninia) is mentioned throughout the novel.

David Bramhall's trilogy "The Greatest Cape" also mentions the rhyme, one of the characters in the first volume, The Black Joke, having been a pirate and a slaver.

In 2007, a collection of short stories entitled The Bight of Benin: Short Fiction by Kelly J. Morris was published by AtacoraPress.com. The stories are set in Ghana, Togo, Benin and Nigeria.

Avant-garde musician Buckethead's song "The Bight of Benin" off the album Albino Slug (2008) is named after this area.

On 6 August 1861 the Bight of Biafra protectorate (see there for their common further history) and Bight of Benin protectorate were joined as a united British protectorate, ultimately to be merged into Nigeria