The Strait of Tiran and Tiran Island 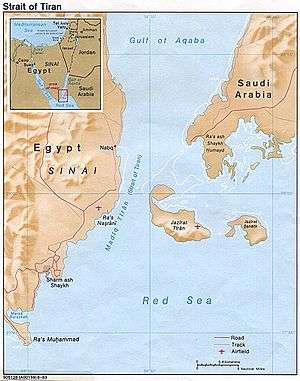 The Straits of Tiran (Arabic: مضيق تيران‎‎ Maḍīq Tīrān) are the narrow sea passages between the Sinai and Arabian peninsulas which separate the Gulf of Aqaba from the Red Sea proper. The distance between the two peninsulas is about 13 km (7 nautical miles). The Strait of Tiran is named after Tiran Island located at its entrance 5 or 6 km (3 or 4 mi) from the Sinai, on which the Multinational Force and Observers has an observation post to monitor the compliance of Egypt in maintaining freedom of navigation of the straits as provided under the Israel-Egypt Peace Treaty.

Sanafir Island lies to the east of Tiran, southeast of the shallow strait between Tiran and Saudi Arabia.

International documents inconsistently refer to both the "Straits of Tiran" and the "Strait of Tiran". There are several passages formed by the islands between Egypt and Saudi Arabia. The westernmost strait, between Egypt and the island of Tiran, overlooked by the Egyptian city Sharm el-Sheikh is the "Strait of Tiran", 5 or 6 km (3 or 4 mi) wide. It has two passages deep enough to be navigable by large ships. The Enterprise passage, 290 metres (950 ft) deep, is adjacent to the Egyptian side, while the 73-metre (240 ft) deep Grafton passage, surrounded by shallows, is to the east, nearer to the island of Tiran. To the east of Tiran, between it and Saudi Arabia, the other strait has reefs and shallows with a single channel 16 metres (52 ft) deep.[1]

Main article: Origins of the Six-Day War § The Straits of Tiran closure

Access to Jordan's only seaport of Aqaba and to Israel's only Red Sea seaport of Eilat is through the Gulf of Aqaba, which gives the Straits of Tiran strategic importance.[2][3] Despite this, according to Major General Indar Jit Rikhye, military adviser to the United Nations Secretary General, the accusation of a blockade was "questionable", pointing out that an Israeli-flagged ship had not passed through the straits in two years, and that "The U.A.R. [Egyptian] navy had searched a couple of ships after the establishment of the blockade and thereafter relaxed its implementation".[4]

In 1967, ninety percent of Israeli oil passed through the Straits of Tiran, making it a target of Egyptian blockade during the Arab League boycott of Israel.[5] Oil tankers that were due to pass through the straits were required to submit documents insuring their cargo was not destined for an Israeli port.[6][7]

However, Israel viewed the Straits of Tiran as a vital interest as it is where Israel received vital imports, mainly oil from Iran, and it threatened Israel's ability to develop the Negev.[8]

A project to build a 15-kilometre (9.3 mi) bridge across the straits, linking Egypt and Saudi Arabia, is under consideration by the Egyptian government (see Saudi–Egypt Causeway).[9]