Aethiopian Sea, Æthiopian Ocean[1] or Æthiopic Ocean (Latin: Æthiopicum Mare or Oceanus Æthiopicus; Arabic: البحر الأثيوبي‎‎) was the name given to the southern part of the Atlantic Ocean in classical geographical works. The name appeared in maps from ancient times to the turn of the 19th century.[2]

The Ethiopian Sea, Ethiopic Ocean or Ethiopian Ocean (Okeanos Aithiopos), is an old name for what is now called the South Atlantic Ocean. It is separated from the North Atlantic Ocean by a narrow region between Natal, Brazil and Monrovia, Liberia. The term Ethiopian Ocean appeared until the mid-19th century, as e.g. on the map Accuratissima Totius Africae in Lucem Producta, engraved by Johann Baptist Homann and Frederick de Wit and published by Jacob von Sandrart in Nürnberg in 1702.[3]

The name Aethiopian Sea to refer to the ocean was related to referring to large swathes of the continent of Africa as Aethiopia. Nowadays the classical use of the term has become obsolete, as the modern nation of Ethiopia is located in the northeastern area of Africa and not near the Ethiopic Ocean.[4] 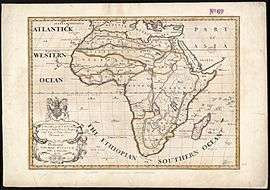 Ancient Greek historians Diodorus and Palaephatus mentioned that the Gorgons lived in the Gorgades, islands in the Aethiopian Sea. The main island was called Cerna and, according to Henry T. Riley, these islands may correspond to Cape Verde.[5]

On 16th century maps, the name of the Northern Atlantic Ocean was Sinus Occidentalis, while the central Atlantic, southwest of present-day Liberia, appeared as Sinus Atlanticus and the Southern Atlantic as Mare Aethiopicum.[6]

By the 17th century John Seller divided the Atlantic Ocean in two parts by means of the equator. He named the northern portion of the Atlantic "Mar del Nort" and the southern part "Oceanus Æthiopicus" in his Atlas Maritimus published in 1672.[7] Edward Wright did not label the North Atlantic at all but called the portion south of the equator the "Aethiopian Sea" in a map that was published posthumously in 1683.[8] John Thornton used the term in "A New Map of the World" from 1703.[9]

Decades after the terms Ethiopian Ocean or Ethiopian Sea had fallen into disuse to refer to the Southern Atlantic Ocean, botanist William Albert Setchell (1864–1943) used the term for the sea around certain islands close to Antarctica.[10]